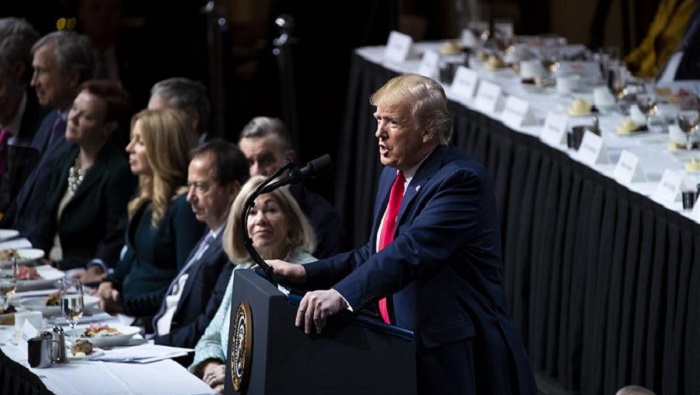 He said his administration has delivered on its promises and exceeded expectations on the U.S. economy, "despite the near-record number of rate increases and quantitative tightening by the Federal Reserve" since he won the presidential election.

"Eight increases in total ...were in my opinion far too fast an increase and far too slow a decrease," he said.

Trump noted that since his election, the S&P 500 has risen more than 45 percent, the Dow Jones Industrial Average has increased over 50 percent and the Nasdaq Composite has been up 60 percent.

"If we had a Federal Reserve that worked with us, you could have added another 25 percent to each of those numbers, I guarantee you that," Trump said.

He said higher interest rates are putting the United States at a competitive disadvantage compared to the rest of the world, especially those countries that have introduced negative interest rates.

"We are actively competing with nations who openly cut interest rates so that now many are actually getting paid when they pay off their loan, known as negative interest. Who ever heard of such a thing?" he said.