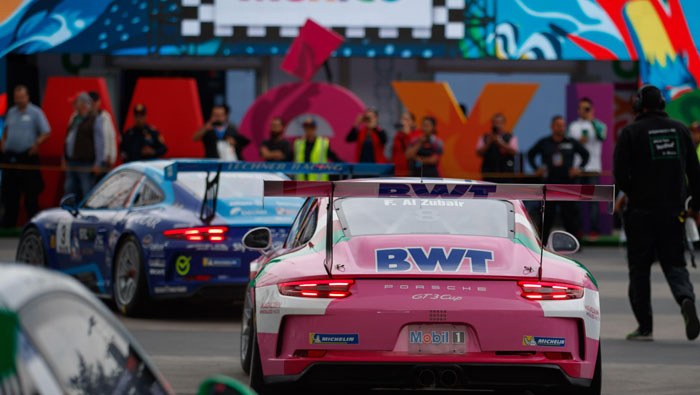 The BWT Lechner Racing Team driver started the race from 13th and moved up as high as 10th before consolidating his 11th place over the closing laps in a race where there was contact between several cars during a stint of frenetic racing.

The Omani said: “It was a bad qualifying session. My first set (of laps) was good but my second set was bad. I started P13 and I will start the second race from P11. Today, in the race, it was like bumper cars out there. Anyhow, I got some damage, finished P11 and so not very happy with it.”

He began the 16-lap race with a 14-point lead over Larry Ten Voorde, but the Dutchman could only manage fifth position behind Turkey’s Ayhancan Güven, Cypriot Tio Ellinas and Frenchman Julien Andlauer. The result means the German claims the title with one race to spare.

Al-Zubair started the race from 13th position and climbed to 12th after the opening lap when Dylan Pereira stopped and Mikkel Pedersen pitted and retired. The Omani held station through the next two laps, as pole winner Ammermüller led from Güven and Ellinas.

Al-Zubair moved up to 11th after four laps and began to challenge Joey Mawson for a top 10 position. The Omani continued to set impressive sector times and climbed to 10th two laps later, on lap seven, when Jaxon Evans lost his place.

There were no changes at the top of the leader board through eight tours of the circuit and Ammermüller headed Güven and Ellinas, with Julien Andlauer and Ten Voorde rounding off the top five. Only 21 of the 26 starters were still in the race heading into the second half.

Al-Zubair lost a place on the 11th lap, as Ten Voorde kept his title hopes alive by passing Andlauer. Mexican racer Ricardo Sanchez managed to pass Al-Zubair on lap 11 and the Omani slipped back to 12th heading into the remaining five laps. He continued to keep the pressure on the local driver, however, and it paid off when Sanchez made a mistake and he managed to regain 11th position.

Ammermüller held on to take the win and the title from Güven and Ellinas and Ten Voorde and Andlauer rounded off the top five after the Frenchman stubbornly re-passed Ten Voorde near the end. Al-Zubair stayed clear of the chasing pack to reach the chequered flag in 11th.

The 30-minute qualifying session took place just three hours before the first of the weekend’s two races. Al-Zubair ran for 14 laps and a best tour of 1min 44.153sec put the Omani in 13th on the grid with pole position falling to team-mate Ammermüller with a time of 1min 43.102sec from Güven and Ellinas.

Teams were permitted to take part in a 45-minute practice session on Friday afternoon on the 4.304km circuit. Twenty-four drivers have entered the weekend’s Super Cup finale and Al-Zubair ran for 21 laps in the session, the Omani posting a best time of 1min 44.594sec that put him in a solid eighth place.

Larry Ten Voorde claimed the fastest lap of 1min 43.741sec in the training session with series leader and defending champion Ammermüller 0.036 seconds adrift in second place and Güven in third.

The final Porsche race of the season was scheduled for Sunday morning.