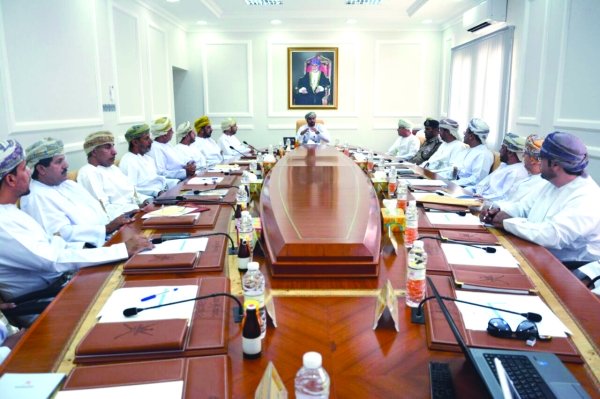 Haima: An extended meeting about the latest developments of the third part of the railway project (Fahud - Duqm) was held at the office of the Governor of Al Wusta on Tuesday.
It was held in the presence of Sheikh Me’athad bin Mohammed Al Ya’qoubi, Governor of Al Wusta, Eng. Abdul Rahman bin Salim Al Hatmi, CEO of Oman Rail and other senior officials.
**media[399626]**
Sheikh Me’athad bin Mohammed Al Ya’qoubi, Governor of Al Wusta stressed the importance of railway track in the Governorate of Al Wusta Part III (Fahud- Duqm).
He highlighted the importance of this project, its sites, stations and the crossing points, if any, with the concerned institutions and the need to take notes that serve the success of the project and achieve its strategic objectives in terms of the overall development of the governorate.
Eng. Abdul Rahman Al Hatmi, CEO of Oman Rail gave an explanation of the track, the stations where the project will pass and reviewed the observations and opinions that will be highlighted by specialists.
Abdulaziz Al Rashdi from Oman Rail gave a presentation on the importance of utilising the promising sectors, which include transport and logistics sector and unique advantages of railway transport, including high payload and less emissions.
The meeting discussed a range of important topics for the success of this project, taking into account the strategic, economic and social dimensions of the governorate and the need for coordination to face all challenges of the railway track in the Governorate of Al Wusta.