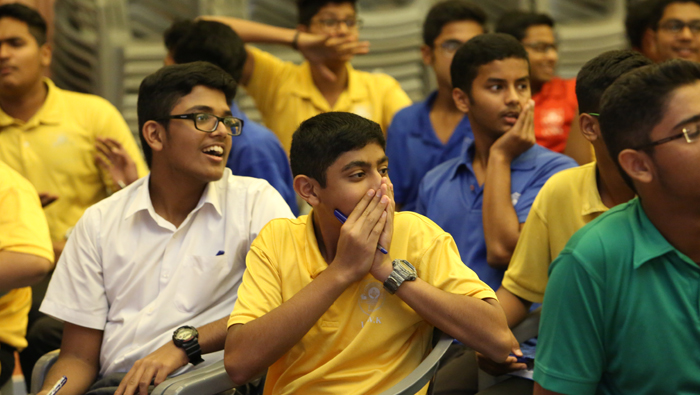 Muscat: As the answers were read-out, the din grew louder. “We didn’t know it would be a cake walk. Looks like the ticket to finals is done,” said jubilant Mohammed Sahil and Gokul Harinair to describe Tuesday gathering at the Indian School, Wadi Kabir.
They were among scores of students vying in the third preliminary round of Times of Oman Inter School Quiz Contest (or TOOISQC) - a flagship event - led by celebrated Indian quizmaster Lloyd Saldanha for the third straight day.
Both the students looked content with what they said were a “mixed bag” of “easy questions” posed in senior category contest.
“We think we answered most of the questions correctly,” they said.
It was a typical Lloyd Saldanha quiz that saw the contest sensibly navigated with the forces of fun and jokes. Known for his witty posers and engaging analysis, Saldanha’s direct, audio and visual queries on science, history, arts and sports kept the crowd of students and teachers glued to the contest. “Besides the contest I am liking his rib tickling one-liners,” one school staffer witnessing the challenge told TOO.
For Rahul Ratnakar - winner of 2015 Essa bin Mohammed Al Zedjali Rolling Trophy in the junior category - “todays contest was good but the competition in mega preliminary will get tough.” His partner Keerthan Venkata said their trainers have put in lots of sweat and that “the preparation is working well.”
“We think we answered all the questions correctly. The coaches in the school trained us well,” he said.
About 350 students participated in the third preliminary round. 35 teams from both categories have made it to the mega preliminary round slated for April 19. Teams from 20 schools are participating in the contest while the top 12 schools are expected to lock horns in the final on April 21 at the City Amphitheatre.
Earlier in the contest for junior category students, Chetan Sethu vowed to repeat his past feat.
Sethu had partnered with Ratnakar to clinch the trophy last year. Ratnakar has moved to senior category this year. “I sense the tough opposition will come from ISG (Indian School Al Ghubra). Students there are just brilliant,” Setha said, adding “But I am hopeful my partner (Aditya B) will help us bag the trophy this year come what may.”