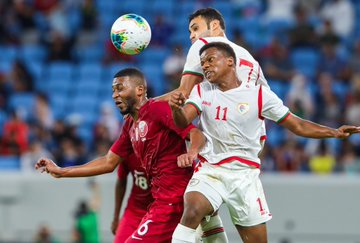 The campaign, which also doubles as qualification rounds for the 2023 Asian Cup, saw the 2022 hosts Qatar take the lead shortly after kick-off, when striker Akram Afif scored after just two minutes at the Jassim bin Hamad Stadium in the Qatari capital.
Gulf Cup champions

It stayed that way until the 65th minute, when Al Mandhar Al Alawi levelled things up for the Gulf Cup champions against the reigning Asian Cup winners. However, that parity would last for just six minutes, when Almoez Ali, who was named top scorer, put the Qataris in the lead once again in the 71st minute.

Narrow defeat
The narrow defeat means Oman stay in second place and will look to make up ground on the Qataris, who lead Group E by four points but have played a game more. Oman’s next World Cup qualifying game will take place against India and Bangladesh next month.

The Omanis knew the threat their fellow GCC nation posed. Speaking before the game, captain Ahmed Mubarak had said, “We are playing the Asian champions Qatar, winners of the Asian Cup, and we have already gained six points which is a strong motivation for us to do our best. We do not have any excuse for not doing our best. Pressure is of course there, in football, but we have to perform and give a real game.”

Coach Erwin Koeman had added, “the Qatari players have not been affected after they played with Bangladesh outside their home nation. They are professional and can play three matches in a span of six days.”

This will not be an excuse for them to play poorly, and they are fully prepared. We respect the Qatari team and we have to perform well to get three points.”