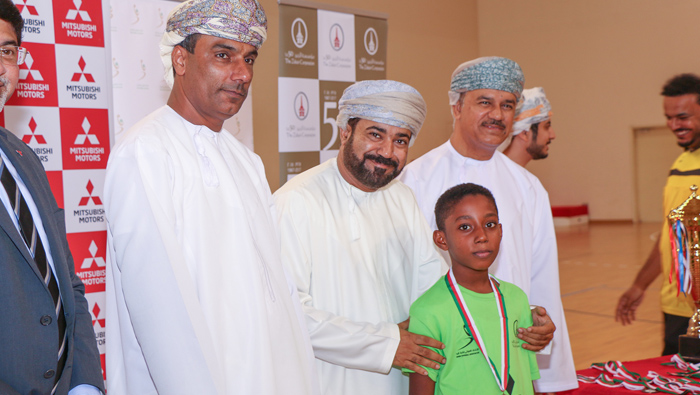 Muscat: The first leg of the fifth edition of the Mitsubishi Oman Handball School Championship took off at the Sultan Qaboos Sports Complex in Bausher in Muscat recently. In the persona executives of Z-Corp and Zubair Automotive Group, officials from OHA among others.

Under the framework of augmenting public and private sector partnership, Z-Corp has been backing all the activities of Oman Handball Association since it signed an agreement in October 2015.

As part of its strategic support to sports activates, Z-Corp is actively involved in supporting local based initiatives that touch the lives of children in sport. While Z-Corp has always been committed to supporting the sports sector in the Sultanate, it believes that to cultivate sporting talent in Oman, youngsters should be provided the perfect ambience to develop it.

Zuwaina Al Azri, communications manager at Zubair Automotive Group said, “The Mitsubishi Oman Handball School Championship which was launched five years ago remains one of the most important initiatives that documents the partnership between the sports sector and Z-Corp and its subsidiary companies. Through the partnership with Oman Handball Association we are more than happy to create this significant platform for the country’s school students to practice handball. We believe the school students who are participating in the matches are Oman’s future players and we are delighted to support them. We are certain with the exposure they get; these children will one day represent Oman in international platforms.”

She added, “In the fifth edition of this championship we are witnessing a remarkable progress in terms of the way it is organised and in the number of schools participating. We are certain that the tournament will continue and achieve its desired goals. I would like thank the team that oversees the organisation and preparation of this tournament and acknowledge the contribution of referees officiating the matches.”

The signing come within the framework of Z-Corp’s strategy and social responsibility to encourage sport performances and achievements. As a private sector player, Z-Corp is keen on realising a long-term strategy aimed at providing support for the youth to invest their energies positively in the world of sports. The group has been constantly supporting and engaging with clubs and associations which focus on young talent, while developing and strengthening local communities at the same time.

Showcasing its continuous commitment to all kinds of sports, Z-Corp has been a partner and sponsor of different sports activities including football, chess, ice sports, volleyball for many years.