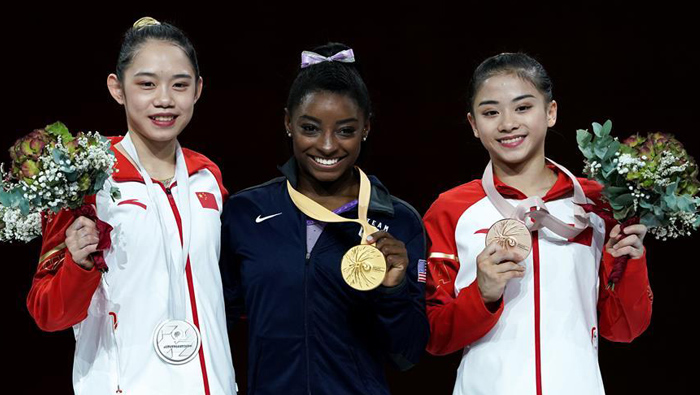 The Chinese performers crossed the line on the last day of competition on the balance beam behind U.S. superstar Simone Biles (15.066 points) with Liu at 14.443 and Li at 14.300.

The Chinese 2019 World's team collected silver at the women's all-around (Tang Xijing), the beam, and in the men's team final aside of bronze on the beam and men's floor (Xiao Ruoteng).

Sunday's medals are a poor showing compared to last year's competition. China has four gold medals, one silver, and one bronze.

Liu admitted she needs to be more relaxed to perform better.

She had been "through lots of things at this championship, and the biggest thing for me is that I had learned how to face the challenges, difficulties, and failures, and how to solve the problems."

Li seems to be developing after bagging a medal at her first Worlds.

"I believe it's good, but not good enough. There're still lots of things to be improved. I don't have many flying moves to win more points. Hopefully, I'll have the chance to compete in Tokyo with more difficult moves and to win better results," Li emphasized.

Russians Nikita Nagornyy (14.966) and Artur Dalaloyan (14.933) finished one-two in the men's vault final to both win their third medals of the meet.

By winning the balance beam gold U.S. superstar Simone Biles (15.066) became the most decorated gymnast, male or female, in the history of the World Championships with her 24th Worlds medal after adding another gold later at the floor (15.133), her 25th gold.