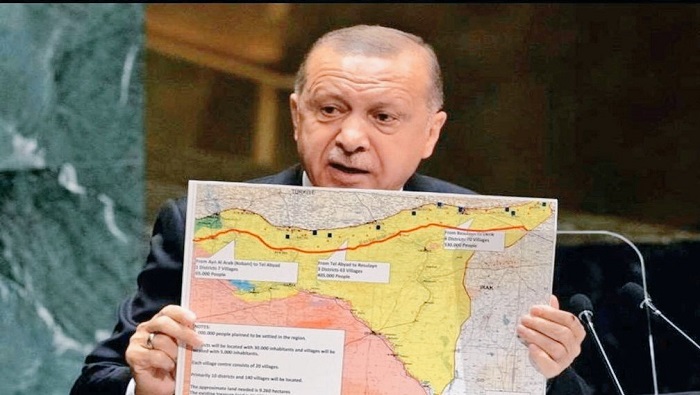 Istanbul: Turkish President Recep Tayyip Erdogan said on Sunday that Turkish forces would "go down to a depth of 30-35 km" into Syrian territory as planned under Ankara's safe-zone project.

"Then, the operation would be completed after taking control of Hasaka and Ayn al-Arab," Erdogan said at a press conference in Istanbul.

He announced that Turkish forces and their allies from Syrian rebels had so far taken control of 109 square km of land in Syria, including 17 villages around Tel Abyad.

Turkey launched the so-called Operation Peace Spring on Wednesday against the Kurdish militia seen by Ankara as a terror group linked to the outlawed Kurdistan Workers' Party (PKK). This came after no headway was made in the establishment of the safe zone in Syria's northeast as agreed with the United States in August.

"A total of 18 civilians, most of them children, were killed, while 147 people were injured in PKK's attacks on Turkey's border," Erdogan said, adding a total of 652 mortar and rocket shells were fired on the Turkish provinces of Sanliurfa, Mardin, Sirnak and Gaziantep.

Since the operation started, the Turkish-led forces have killed 440 fighters of the Kurdish militia, while two Turkish soldiers and 16 Syrian fighters have lost their lives, said the Turkish leader.

Erdogan had said that the operation would ensure Turkey's border security and the safe return of the Syrian refugees being sheltered in Turkey by clearing terror groups of the east of the Euphrates River in Syria.

In another development, the Syrian army on Sunday started moving toward the northern region to "confront the Turkish aggression on Syrian soil," Syrian state TV reported.

Press reports said earlier that the Syrian army would enter two key Kurdish cities in northern Syria, Manbij and Ayn al-Arab, after a deal was reached between the Kurdish-led Syrian Democratic Forces (SDF) and Russia about the entry of the Syrian army into the two cities.

A well-informed Kurdish source reached by Xinhua also confirmed that the Syrian army would assume control over Manbij and Ayn al-Arab, both are key Kurdish-held cities in northern Syria.

The Syrian army's move was viewed as part of its bid to strip Turkey of its pretext to attack the Kurdish-controlled areas in northern Syria.