India beat South Africa by an innings and 137 runs 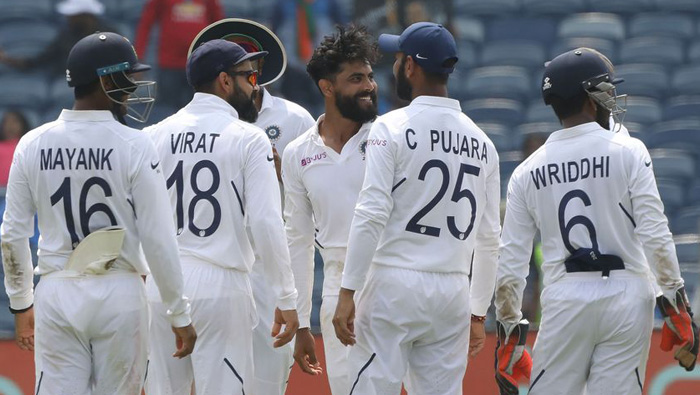 Pune: India swept to victory by an innings and 137 runs against South Africa at Pune, taking an unassailable 2-0 lead in the series and maintaining their 100 per cent World Test Championship record.
Having brought the Proteas’ first innings to a close in the final moments of the third day, India began the fourth by choosing to enforce the follow on, and got instant reward as Ishant Sharma pinned Aiden Markram lbw for 0, the opener recording a pair. Theunis de Bruyn followed not long after for 8, nicked off by Umesh Yadav, and once again South Africa were up against it.
Captain Faf du Plessis, promoting himself to No.4 this time around, stuck in for a gritty 5 off 54 balls, but when he, opener Dean Elgar, and Quinton de Kock all fell in the space of five overs, a quick finish looked on the cards. Ravichandran Ashwin removed the first two, while de Kock was bowled by Ravindra Jadeja.
Temba Bavuma and Senuran Muthusamy helped steady the ship, blocking out the next 15 overs after de Kock’s dismissal, but both fell in the space of 10 balls, the former edging to first slip for Ajinkya Rahane to take a fine catch, and the latter fending a rising ball from Mohammed Shami to second slip.
Once again, Vernon Philander and Keshav Maharaj frustrated the hosts, joining forces for more than 20 overs to raise the tourists’ hopes of taking the contest to a fifth day, but the end came all of a sudden, Umesh dismissing Philander and Rabada in the same over, and Maharaj trapped in front by Jadeja two balls into the next over, victory secured with utmost ease.
Having convincingly outplayed South Africa in both the pace and spin departments, India will go into the third Test at Ranchi, which begins on 19 October, with sights firmly set on securing a 3-0 whitewash.