Indian nun from Kerala to be given sainthood in Vatican City 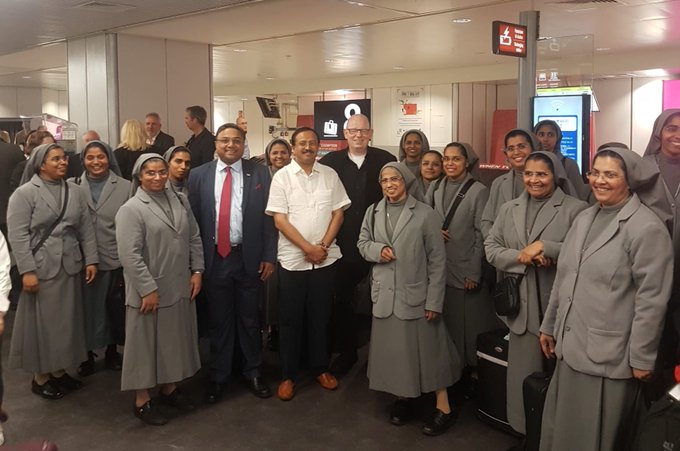 Vatican City: An Indian nun from the state of Kerala who spent nearly all her life caring for the poor and healing the sick will be given sainthood at a special ceremony on Sunday, 13 October, in Vatican City.

Sister Mariam Thresia, the founder of the Congregation of the Sisters of the Holy Family (CHF), will be conferred sainthood by the Catholic Church in Rome’s St Peter’s Square, as part of a ceremony that will see the raising of five new saints. Besides sister Mariam Thresia, the others are British Cardinal John Newman, Swiss sister Marguerite Bays, Brazilian sister Dulce Lopes and Italian sister Giuseppina Vannini.

“Sister Mariam Theresia was born in Puthenchira, in southern India’s Kerala state, on 26 April, 1876,” said Father Robin Gomes of the Vatican News, the official news agency of the Holy See.

“Belonging to a once rich and noble family with extensive landed property, the future pioneer of the family apostolate grew up in piety and holiness under the loving guidance of her saintly mother, Thanda."

“The eight-year old girl gave herself up to austere, penance, fasting and prayer,” he added. “She helped the poor, nursed the sick, visited and comforted the lonely people of her parish. Thresia and three companions who joined her led a life of prayer and austere penance and continued to help families, visiting the sick, the poor and the needy irrespective of religion or caste. This ministry led her to establish the new Congregation of the Holy Family on 14 May 1914,” he added.

Sister Thresia died on 8 June, 1926, at the age of 50, and was declared blessed by Pope Saint John Paul II on 9 April, 2000. Pope Francis on 12 February authorised a decree recognising a miracle through her intercession, which cleared her for sainthood, and on 1 July, the Pope decided on 13 October as ‘Canonisation' day.

Father Gomes added, “Since then, the sisters of the Congregation of the Holy Family have been preparing intensely for this great day, said Sister Udaya, the Superior General of the Congregation. In Rome for Sunday’s canonisation, she explained to Vatican news that they are concentrating more on spiritual preparation and works of charity for the family than external preparation.”

The Indian government will be represented by V Muraleedharan, the minister of state for External Affairs and Parliamentary Affairs who said he’d be “leading the Indian delegation to the Vatican for the canonisation of Sister Mariam Thresia. Glad to meet the delegation from the Congregation of the Holy Family founded by Sister Thresia at the Rome Airport.”

In 1913, Sister Mariam created her first small community with two friends. It was to become the nucleus of the Congregation of the Holy Family. During the 12 years in which Mother Mariam was at the head of the congregation, despite the difficulties associated with the outbreak of the First World War, it flourished with new convents, schools, boarding schools and orphanages.”

Earlier this year, on 12 February, Pope Francis, the head of the Catholic Church, authorised the sainthood of the five individuals who chose to dedicate their lives for the greater good.