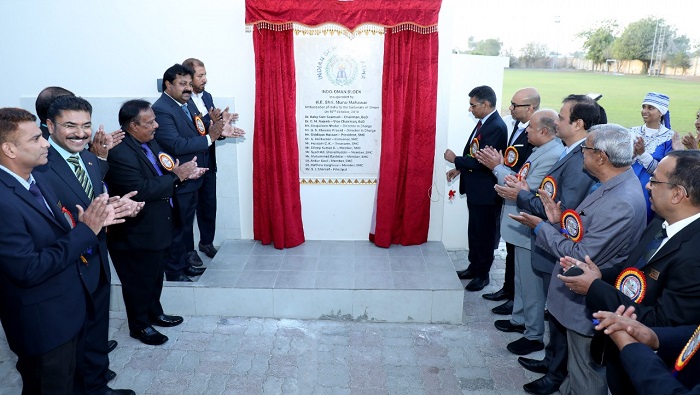 Muladha: The inaugural ceremony of the newly constructed ‘Indo-Oman’ block at Indian school Muladha was held on 10th October, 2019 on the premises of the school.

The distinguished guests were given a cordial reception by students who were clad in traditional Indian and Omani attires and stood on both sides of the pavement while they were ushered to the venue. The Chief Guest officially inaugurated the Indo-Oman block in a spectacular ceremony held at 5.20 pm. The dignitaries walked through the new building comprising 27 classrooms which is expected to streamline the system by enhancing the infrastructure of the school.

The ceremony commenced with the rendition of the national anthem of Oman and that of India. At the very outset,the school choir invoked the blessings of the Almighty and extended a hearty welcome to the gathering by singing the welcome song. In the cultural extravaganza which followed, the students marked the day with variegated scintillating performances.

The senior students of the school showcased a semi-classical dance ‘Bharatanjali’. Class 2 students enthralled the audience with a spectacular folk dance ‘Haryanvi’.

The school choir put up mesmerising musical composition. The synchronized folk dance and Arabic dance by the kindergarten students were absolutely outstanding. There was a digital presentation which screened the commendable journey of ISML braving all the hurdles on its way to excellence ever since its inception in 1991.

The Chief Guest, in his address, appreciated the excellence achieved by the Indian schooling system especially in the recent years under the leadership of Dr. Baby Sam Saamuel, Chairman, BoD.

He elaborated on the strategic partnership between India and Oman and advocated on the need to sensitize the students to understand and recognize such a historic partnership and spirit of camaraderie that exists between the people of both countries.

The Guest of Honour, in his inspiring speech on the occasion, stressed on the necessity of transformative learning that each student in Indian schooling system has to undergo as part of education. Both the Chief Guest and the Guest of Honour appreciated the painstaking effort of the SMC and well-wishers in attaining the milestone achievement of constructing the Indo-Oman block.

Dr. C.M. Najeeb, Vice Chairman, BoD expressed his commendation for the SMC and well-wishers who worked relentlessly to streamline the functioning of the school and enhance the quality teaching.