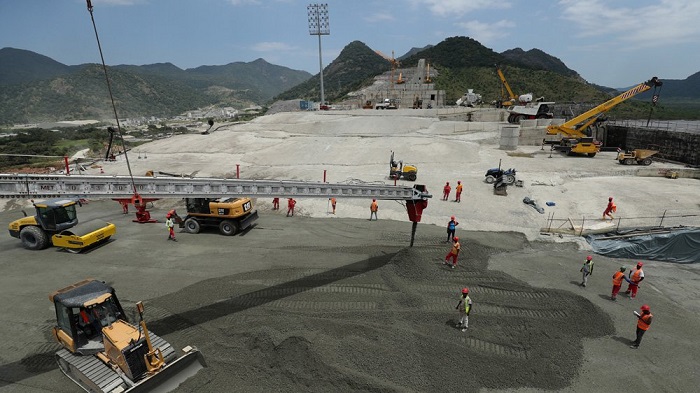 Cairo: Egyptian President Abdel-Fattah al-Sisi and Ethiopian Prime Minister Abiy Ahmed highlighted on Friday the importance of overcoming all obstacles facing the tripartite negotiations over the Grand Ethiopian Renaissance Dam (GERD) that Ethiopia is building on the Nile River.

Egyptian Presidency Spokesperson Bassam Rady said in a statement that al-Sisi received a phone call from Prime Minister Ahmed in which the two leaders agreed that an agreement should be reached that fulfils the hopes and aspirations of the peoples of Egypt, Sudan and Ethiopia within the framework of the Declaration of Principles signed by the three countries.

On 5 October, Egypt said the negotiations on the GERD between Egyptian, Sudanese and Ethiopian ministers of irrigation in the Sudanese capital of Khartoum had reached "a dead end."

Egypt held Ethiopia responsible for the failure of the negotiations, saying it "rejected all proposals that would help Egypt avoid serious harms because of the construction of the dam."

Ethiopia hoped to fill the dam's reservoir, whose total capacity is 74 billion cubic meters, in five to six years, while Egypt has been seeking to prolong the period to avoid the negative effects of water shortage.

Egypt, a downstream Nile Basin country, is concerned that the construction of the GERD might affect its 55.5-billion-cubic-meter annual share of the river water.

Ethiopia started building the dam in 2011, which is expected to produce more than 6,000 megawatts of electricity and become the largest hydropower dam in Africa upon completion.

Addressing a general session of the House of Representatives, Madbouli said Ethiopia took a unilateral decision in 2011 to build the GERD, adding Ethiopia rejected all proposals submitted by Egypt to solve the difference in the latest round of negotiations held in Khartoum.

"It has become very difficult to reach agreements with Ethiopia" as Ethiopia wants to impose the status quo on Egypt, the prime minister noted.

Despite the deadlock, Madbouli said the dialogue is still open for reaching a solution that will not harm the Egyptian rights to the Nile water.