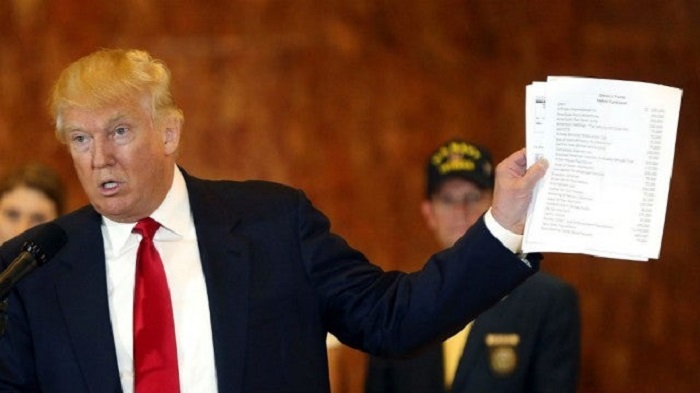 Washington: A US federal appeals court ruled Friday to uphold an earlier subpoena ordering that President Donald Trump's accountants hand his financial records over to Congress for investigation, marking the president's second defeat within a week in his months-long legal efforts to keep his financial documents secret.

Three judges of the Court of Appeals for the District of Columbia Circuit ruled 2-1 to endorse a subpoena issued 15 April by Democrat-controlled House Committee on Oversight and Reform requesting that Mazars USA, Trump's accounting firm, provide eight years of the president's financial records between 2011 and 2018.

"Contrary to the president's arguments, the Committee possesses authority under both the House rules and the Constitution to issue the subpoena, and Mazars must comply," Judge David Tatel and Judge Patricia Millett wrote in a 66-page opinion Friday.

Tatel and Millett were both appointed by Democratic presidents while Neomi Rao, the judge who dissented the ruling, is a Trump appointee.

Rao, for her part, argued that in order to carry out an investigation into the president, the House will have to invoke constitutional impeachment powers, instead of resorting to regular oversight capacities.

"Throughout our history, Congress, the President, and the courts have insisted upon maintaining the separation between the legislative and impeachment powers of the House and recognized the gravity and accountability that follow impeachment," Rao said in her dissent. "Allowing the Committee to issue this subpoena for legislative purposes would turn Congress into a roving inquisition over a co-equal branch of government.”

"Today's ruling is a fundamental and resounding victory for Congressional oversight, our Constitutional system of checks and balances, and the rule of law," Chairman of House Committee on Oversight and Reform Elijah Cummings said in a statement Friday.

"For far too long, the president has placed his personal interests over the interests of the American people," the Maryland Democrat added.

Mazars USA said it would respect the legal process and fully comply with its legal obligations.

On 22 April, Trump filed a lawsuit in the US District Court for the District of Columbia against Mazars USA and Cummings, claiming that an investigation into his past personal dealings is beyond the job of Congress.

"There is no possible legislation at the end of this tunnel," Trump's attorneys wrote in a brief at the time. "The Oversight Committee is instead assuming the powers of the Department of Justice, investigating (dubious and partisan) allegations of illegal conduct by private individuals.”

US District Judge Amit Mehta ruled against Trump on 20 May, arguing in a 41-page opinion that it is "simply not fathomable that a Constitution that grants Congress the power to remove a president for reasons including criminal behavior would deny Congress the power to investigate him for unlawful conduct -- past or present -- even without formally opening an impeachment inquiry.”

In a separate case, Trump tried in a Sept. 19 lawsuit filed in the U.S. District Court for the Southern District of New York to block a subpoena issued in August by Manhattan District Attorney Cyrus Vance -- a Democrat — requesting the president's eight years of personal and corporate tax returns data, as well as other financial documents.

US District Judge Victor Marrero ruled against Trump on Monday, rebutting the reasoning of Trump's lawyers that sitting presidents are immune to criminal process.

Such immunity, Marrero wrote in a decision, would temporarily "frustrate the administration of justice by insulating from criminal law scrutiny and judicial review."

The US Second Circuit Court of Appeals in New York issued an emergency stay to the ruling later on the same day, giving the president a reprieve.