Oman certain to clinch T20 Series with win over the Netherlands 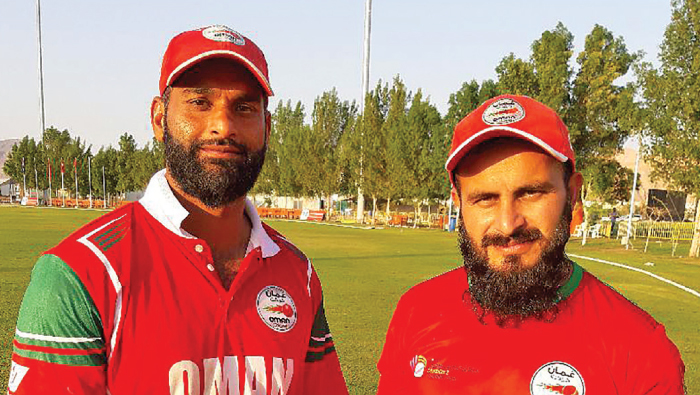 Muscat: Oman maintained its unbeaten run in the Pentangular T20 Series with its third successive win as spinners Khawar Ali and Zeeshan Maqsood ran through a hapless the Netherlands on Wednesday, scripting a comfortable 7-wicket victory for the hosts at Amerat’s lush green turf ground.
Oman now take on third-placed Nepal today in its fourth and final game.
Sitting firmly on top with six points from three games and an almost insurmountable net run rate ahead of second-placed Ireland, Oman has all but won the tournament already, irrespectively of Thursday’s result unless of course Nepal performs a miracle by scoring a massive win to improve its net run rate so much that it leaps ahead of the top two teams.
With the wickets slowing down as the tournament progresses, Oman spinners were almost unplayable as Netherlands was shot out for a paltry 94 in less than 16 overs. Khawar Ali started the slide by taking a hat-trick when Netherlands looked set for a good total on the board, cruising at 70 for 2 in 9 overs. He dismissed Antonius Staal, Colin Ackerman and Roelof van der Merwe off successive deliveries to derail the tourists’s innings. Captain Zeeshan Maqsood made things even more difficult for the Dutch as they collapsed to 94 in 15.3 overs.
Ace opener Aqib Ilyas smashed a strokeful 44 to power Oman to yet another emphatic win. Khawar Ali (20 off 26) and Amir Kaleem (15 off 14) were the other notable scorers.
“I couldn’t have been happier but I really wish more players were involved in securing these victories. Some of our batsmen are not getting enough time in the middle because we are having to chase smaller totals. I would have loved to see some of our other batsmen getting the opportunity to spend some time in the middle before we head to UAE for the ICC T20 World Cup Qualifier. However, we have got a major boost in our confidence playing these games which was our main goal. Winning the tournament would be a real icing on the cake,” said Duleep Mendis, Oman’s Head Coach after beating The Netherlands on Wednesday.
The Sri Lankan great said he was glad to see all his spinners bowling well which would help the team in UAE.
Hat-trick hero Khawar Ali said he was in good rhythm and hitting the right areas.
“I am bowling with a lot of confidence now. Today’s hat-trick wasn’t easy as the third batsman I managed to get out was Van Der Merwe who is a seasoned player. When he came in I bowled him a googly knowing that he would be expecting a leg-spin. He couldn’t read it and was caught plumb in front,” added Khawar.
In the day’s other game, Ireland defeated Nepal by 13 runs to finish the tournament at 6 points from four games. Nepal was bowled out for 132 in 19.5 overs, chasing Ireland’s 145 for 8 in 20 overs.
Today’s matches: Hong Kong vs Netherlands (9.30 am). Oman vs Nepal (2 pm).
Brief scores: Netherlands 94 all out in 15.3 overs (MP O’Dowd 24 – 3x4, 1x6, A J Staal 19 – 1x4, 1x6. Zeeshan Maqsood 4-07, Khawar Ali 4-16) lost to Oman 95 for 1 in 14 overs (Aqib Ilyas 44 – 3x4, 2x6, Khawar Ali 20 – 2x4. Amir Kaleem 15 not out – 1x4, 1x6. Pieter Seelar 2-20) by 7 wickets.
Brief scores: Ireland 145 for 8 in 20 overs (Paul Stirling 59 – 6x4, 2x6, Andy Bilbirnie 38 – 5x4, 1x6, Stuart Thompson 21 not out – 2x6. Sandeep Lamichhane 2-21, A Bohara 2-22) beat Nepal 132 all out in 19.5 overs (Aarif Sheikh 26 – 2x4, Paras Khadka 25 – 2x4, 2x6, I Pandey 22 – 3x4. Mark Adair 3-22, George Dockerell 3-23, Gareth Delany 2-30) by 13 runs.