World Post Day marked with a host of activities 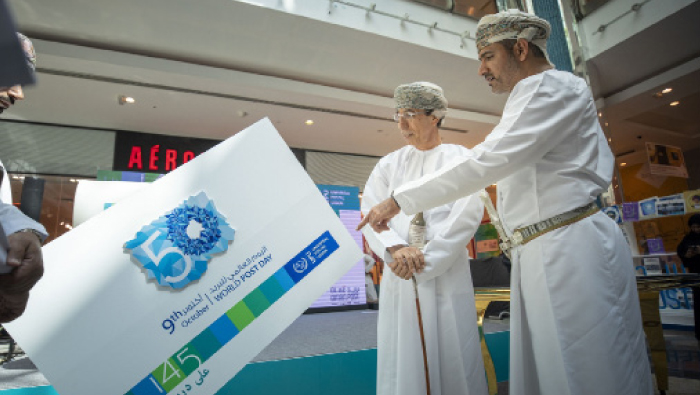 Muscat: Oman commemorated the 145th World Post Day — which coincides with the anniversary of the establishment of the Universal Postal Union — with a dedicated exhibition and a host of activities at Muscat Grand Mall, spearheaded by the Ministry of Transport and Communications.
The inauguration of the three day festivities kicked-off under the patronage of HE Said Bin Hamdoon Al Harthy, undersecretary of the Ministry of Transport and Communications of Ports and Maritime Affairs & Acting Undersecretary of Communications in the Ministry of Transport and Communications.
The special event has been organised by the Ministry of Transport and Communications in collaboration with Oman Post, an Asyad Group member company.
Spanning three days from 9 to 11 October, 2019, the exhibition is open to the public from 10.00 am till 10.00 pm on Wednesday and Thursday with Friday’s visiting hours being from 1.30 pm till 10.00 pm.
Al Harthy said, “The Ministry’s vision is to position Oman as a leader in the postal services sector, delivering social and economic growth. We are working towards that goal by identifying and analysing latest trends that influence the future of integrated end-to-end postal services and logistics locally and internationally.”
“With 2020 approaching, we realise that technology is playing an increasingly significant role in the postal sector and this commemorative event is an opportunity to engage with the public face-to-face to showcase how delivering modern and innovative postal services facilitate communication among people, service providers and customers alike. We want to create awareness of the present of the sector and highlight its importance to the future,” he added.
The event includes dedicated booths for the Ministry of Transport and Communications, the Telecommunication Regulatory Authority, Oman Post, in addition to the Royal Oman Police, Customs, and the Philatelic & Numismatic Centre highlighting their roles and contributions to the postal services’ sector, its history and its present and future and impact on society.
The exhibition also saw Oman Post launch a commemorative post card adapting the UPU’s official poster of the occasion.
Other activities include a section for philately enthusiasts to share their stamp collections, and a public auction for vintage Omani stamps. On the sidelines of the exhibition, Oman Post also signed two Memorandums of Understanding (MoU’s) with Souq Mazoon, part of Zubair Small Enterprises Centre and MarkeetEx, an e-commerce platform to be there logistics partner across Oman and internationally.
Abdul Malik Al Balushi, chief executive officer of Oman Post said, “Oman is commemorating World Post Day to bring awareness to the postal service’s role in everyday lives of people and businesses, as well as its contribution to social and economic development. Oman Post is an active member of the UPU, a specialised agency of the United Nations who has a membership of 192 countries worldwide.”
“We are joining efforts with the Ministry of Transport and Communications, and all stakeholders to create excitement around this occasion with various activities geared towards the public. The exhibition is a great opportunity to see philately enthusiasts engaged and sharing their collections, also vintage Omani stamps are on auction for the first time in Oman Post’s history. To further commemorate this occasion, Oman Post launched a special post card featuring this year’s global theme,” he added.
World Post Day is celebrated annually on 9 October, the anniversary of the establishment of the Universal Postal Union in 1874 in the Swiss Capital, Bern. It was declared World Post Day by the UPU Congress held in Tokyo, Japan in 1969. Since then, countries across the world participate annually in the celebrations.