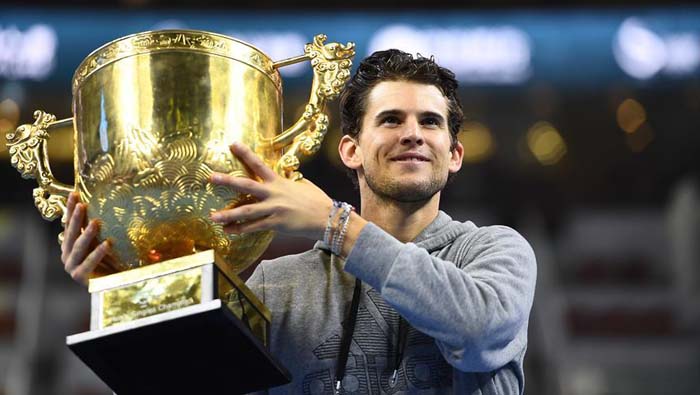 Beijing: No. 1 seed Dominic Thiem opened up about his come-from-behind 3-6, 6-4, 6-1 victory over third-seeded Stefanos Tsitsipas here on Sunday.

Thiem started off by calling the meeting a highlight of his career in the post-match press conference.

"Today was for me one of the best matches I've played in my life. Game style wise and also how I came back, it's definitely one of my biggest titles because the tournament is so strong, the draw was so strong. Makes me very happy that I stand as the champion at the end of the week," Thiem remarked.

Thiem pointed to a couple of key points in the match as decisive.

"I think there were two turning points. [One] was 3-6, 1-2, a break down. Straightaway I came back. I changed my return position a little bit. He served well, so I tried to mix it up a little bit. It worked out. Of course, it gave me a lot of confidence to come straight back into the match.

Thiem, who sealed his fourth title of the year with the win in Beijing Sunday, noted that Tsitsipas was a powerful opponent, especially on defense.

"He was going [at] an incredible pace in the first set. I really had trouble to keep it up. Always when I returned closer to the baseline, I didn't hit the perfect return. He was straightaway coming in and straightaway putting [on] pressure. If he does that, he's almost unstoppable.

That's why I tried to return little bit farther behind the baseline to give myself more time, to come more neutral into the rallies. If I'm in the defense against a player like him, I cannot win," Thiem admitted.

He also highlighted his preparation in the run up to this week's tournament as important.

"I had a great preparation for this tournament. From [the] Laver Cup on I started to play really well. I came into the tournament with good confidence, played great tennis from the first match on. Of course, you can never expect to end up as a winner. That's why I'm very happy that I did it," he said.