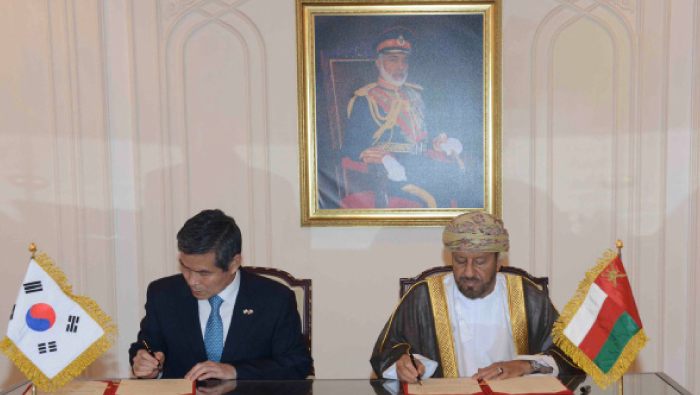 Muscat: The Sultanate and Republic of Korea on Monday signed a Memorandum of Understanding (MoU) in the field of military cooperation between the two friendly countries at the headquarters of the Ministry of Defence at Bait Al Falaj.
The MoU was signed from the Omani side by Sayyid Badr bin Saud bin Harib Al Busaidi, Minister Responsible for Defence Affairs, while it was signed from the Korean side by Jeong Kyeong-doo, Minister of National Defence of the Republic of Korea, who is on a several-day visit to the Sultanate.
The MoU aims at framing aspects of the military cooperation between Oman and Korea to enhance relations of the existing cooperation and to serve the joint interest of the two friendly countries. After the signing ceremony, Minister Responsible for Defence Affairs held an official talks session with the Korean Minister of National Defence, in which they reviewed relations of the existing military cooperation between the two friendly countries and means of enhancing them, besides discussing a number of matters of common concern. The signing ceremony and the talks session were attended by Mohammed bin Nasser Al Rasbi, Secretary General of the Ministry of Defence, Lt Gen Ahmed bin Harith Al Nabhani, Chief of Staff of the SAF, the Korean ambassador and the delegation accompanying the guest.