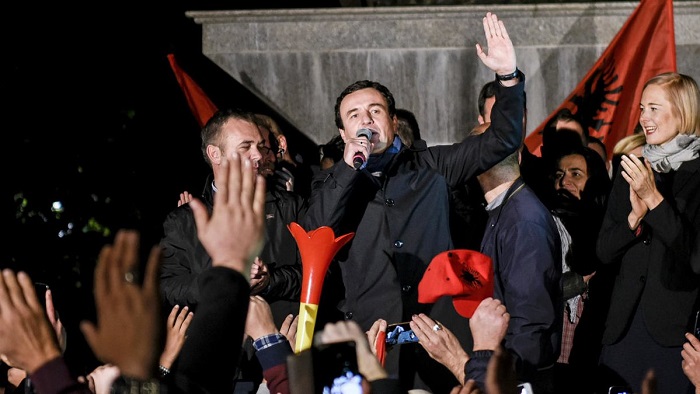 Prishtina: Opposition parties won the night in Kosovo's election on Sunday, taking the lead over former guerrillas who have dominated politics for the past decade.

The leftist-nationalist Vetevendosje was in first place with nearly 26 per cent of the vote, just ahead of the centre-right LDK with more than 90 per cent of ballots counted, the electoral commission said.

Fed up with widespread corruption and poverty, voters delivered a heavy rebuke to the outgoing government led by former independence fighters from Kosovo's 1990s war with Serbia.

"We did not win. We accept the verdict of the people and the PDK moves to the opposition," conceded Kadri Veseli, whose party is tied to President Hashim Thaci and has been in power since 2007.

With no one taking an absolute majority, the opposition camps will need to unite against the PDK.

They have little overlap ideologically but have already signalled interest in joining forces.

"I will offer them a hand of cooperation as Prime Minister of Kosovo to crown the change," Vetevendosje leader Albin Kurti said late Sunday of the LDK.

Meanwhile, the LDK's prime minister candidate, Vjosa Osmani, said she believed the parties would "sit down and talk about a coalition".

Kurti, who will be tasked with forming the government if his party's lead is cemented, first gained fame as a student activist protesting Serbian repression in the 1990s before the war broke out.

The 44-year-old has since become a strident critic of Kosovo's political elite, and his place at the helm would herald a new era for the young democracy.

"We have waited a long time for this victory," said Ardi, a student in Pristina who joined exuberant crowds celebrating with flags and fireworks in the capital late on Sunday.

Kurti's party "brings a big change and gives us young people hope to see a future here," he said.

Sunday's snap poll was called after ex-prime minister Ramush Haradinaj, a former guerrilla commander, resigned in July to face questioning by a special court in The Hague investigating war crimes from the 1998-99 separatist conflict with Serbia.

His party, which was allied with the PDK in the former government but this time ran alone, had one of the weaker showings with 11.6 per cent.

In addition to tackling a host of social and economic problems at home, the new leaders will now be under heavy pressure from the West to resolve Kosovo and Serbia's "frozen conflict".

The neighbours have yet to normalise ties two decades after they clashed in the war, a lingering source of instability in Europe.