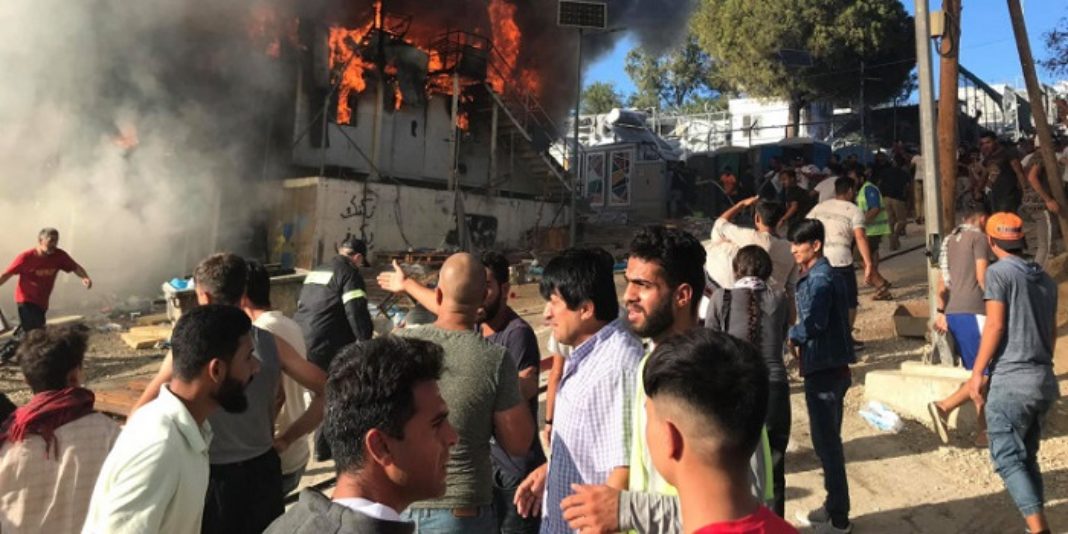 Athens: At least two people have died in a fire at a Greek island refugee camp that triggered rioting by angry residents.

A woman and a child died in the blaze at the overcrowded Moria camp on the island of Lesbos, Athens News Agency reported, quoting police sources. The body of the woman was taken to the island’s general hospital while the body of the child was handed over to authorities by migrants.

The death toll, however, was unclear. One witness said three people died as a result of the fire, which spread to six or seven containers used as shelters. “We found two children completely charred and a woman dead. We gave the children covered in blankets to the fire brigade,” Afghani migrant Fedouz, 15, said.

The fire inside the camp was extinguished by plane. However, a crowd gathered, angered at the time authorities took to respond to the incident, and police later fired teargas to quell the unrest.

In a statement, police said the riots occurred after two separate fires broke out, firstly outside and then inside Moria camp, 20 minutes apart.

Additional officers were sent from Athens in C-130 army planes, although local police sources said calm had returned to the camp by 11pm GMT.

Lefteris Economou, the deputy minister of citizen protection, along with the chief of police and the secretary general for migration policy, are due to visit the camp.

Moria camp hosts about 13,000 people but has facilities for just 3,000. It has become like a small town with UN refugee agency tents for about 8,000 people sprawling into the olive fields of the nearby village. Others are housed in containers.

Greece is hosting 70,000 mostly Syrian refugees and migrants who have fled their countries since 2015, and crossed over from neighbouring Turkey.

Under an agreement reached with the European Union in 2016, Turkey has made greater efforts to limit departures towards the five Greek islands closest to its shores.

But the number of arrivals has been steadily climbing in recent months causing a dangerous burden in the camps of the islands that are in the forefront of the migrant influx.

The Greek government said on Sunday it planned to discuss a new asylum draft law to deal with the fresh migrant crisis.

Minister of state George Gerapetritis said in an interview with Skai TV on Sunday: “In the cabinet meeting on Monday, we are going to discuss a draft law proposed by the citizen’s protection ministry which will update, in accordance with European standards, the asylum procedure.”

He stressed that migrants should be sent to camps with humane conditions, admitting that existing ones were not able to deal with the increase in migrants.