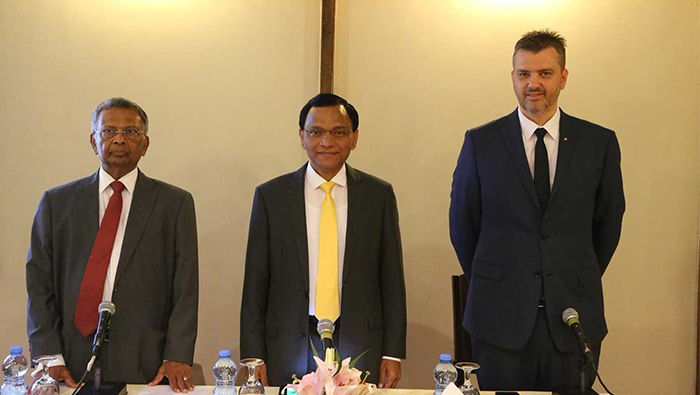 Muscat: Sri Lankan import of Omani goods rose by nearly $25 million between 2017 and 2018, the country’s ambassador to the Sultanate said.
With both countries looking to set up stronger economic ties, Omani exports to Sri Lanka crossed the $100 million mark and reached $100.7 million in 2018.
Commenting on the volume of trade between the Sultanate and his home country, ambassador O. L. Ameer Ajwad said, “The total volume of trade for 2018 was $117 million, with the trade balance in 2017 being $65.42 million. In 2018, $84.24 million was the balance of trade. Sri Lanka’s exports to Oman were $12.02 million in 2017 and rose to $16.48 in 2018. Imports from Oman to Sri Lanka rose from $77.4 million in 2017 to $100.7 million in 2018.”
“These are clear figures that show that there is an increase in trade between the two countries. The trade volume between Oman and Sri Lanka has increased over the recent past. Trade and inter-personal contact between people dates back centuries,” he added
To further promote trade, Ajwad has organised a series of meetings between 11 companies, who will be coming to Oman to promote Sri Lankan goods and generate awareness of their products during Sri Lanka Week, which will run from October 1-5, with the Oman Chamber of Commerce and Industry, as well as other businessmen in a series of B2B (business to business) meetings on October 1.
The 11 Sri Lankan companies will arrive in Muscat to meet with officials from the Oman Chamber of Commerce and Industry, as well as businessmen in Oman, to set up operations in the Sultanate.
“We have organised B2B meetings between the visiting Sri Lankan trade companies and the Oman Chamber of Commerce and Industry on October 1,” Ameer Ajwad said. “We are delighted with the Oman Chamber of Commerce and Industry in showing their interest and welcome these Sri Lankan companies that are specialised food companies and encourage them to operate in Oman. All of these companies are specialised in consumer foods."
The ambassador added, “Sri Lanka is a business hub in the Indian Ocean. These kinds of promotions will help promote trade between the two countries, so we are focusing on those items that have more potential for demand. We will start with the food and consumables sector and move forward to other areas on a step-by-step basis.”