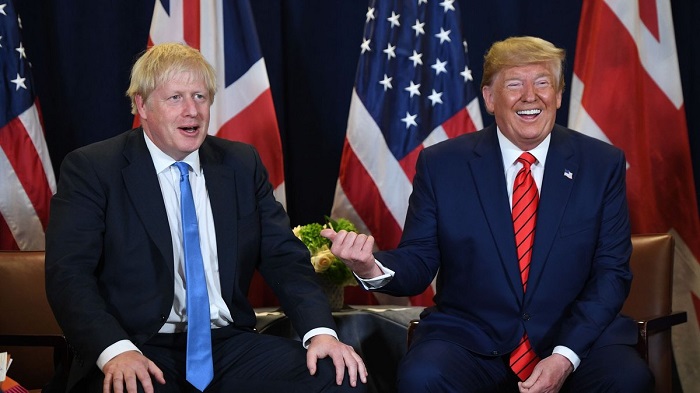 London: A humiliated UK Prime Minister Boris Johnson has been forced to cut short a set-piece visit to New York at the United Nations and fly back to face furious MPs, after his decision to shut down parliament was dramatically quashed by the supreme court.

After Lady Hale delivered a crushing unanimous verdict in which she said Johnson’s advice to the Queen to suspend parliament was, “unlawful, void and of no effect”, the prime minister struck a defiant tone.

“Let’s be absolutely clear that we respect the judiciary in our country and we respect the court. I disagree profoundly with what they had to say,” he said, before pressing ahead with a planned speech on the business links between the UK and the US.

But a No 10 source criticised the 11 supreme court judges, saying they had made “a serious mistake in extending its reach to these political matters.”

The leader of the House of Commons, Jacob Rees-Mogg, who travelled to Balmoral to formalise the decision to suspend parliament with the Queen, reportedly told colleagues on a cabinet conference call that the supreme court judgment was a “constitutional coup”.

Opposition MPs are determined to force Johnson to face questions in parliament, after the Speaker, John Bercow, announced from College Green in Westminster that the House of Commons would reconvene on Wednesday morning.

Jeremy Corbyn was consulting with fellow opposition leaders on Tuesday evening about how to exert maximum pressure on the prime minister and ensure he cannot escape the legal obligation set out in the Benn bill to delay Brexit if he hasn’t passed a deal by 19 October.

The Labour leader, who on Tuesday delivered his conference speech 24 hours early after the decision to recall parliament, was not expected to take the nuclear option of tabling a vote of no confidence in the prime minister immediately, but MPs were exploring ways of forcing Johnson to extend article 50.

Corbyn would be unlikely to secure the support of Liberal Democrat or rebel Tory MPs in a no-confidence vote, unless a no-deal Brexit has been definitively ruled out – which many MPs believe means after Johnson has requested a Brexit delay.

However, Johnson has repeatedly insisted that he has no intention of asking for an extension if he has failed to secure a majority for a Brexit deal by 19 October.

Johnson, who has lost a series of Commons votes since becoming prime minister, is due to arrive in London around lunchtime on Wednesday after an overnight flight back from the UN general assembly.

However, a government official in New York with the prime minister said it was impossible to say whether Johnson would appear before the Commons.

“I would anticipate there would be statements to the house, I’m just not in a position to say what they will be on,” the official said.

Downing Street suggested the prime minister would continue to push for a snap general election, while opposition parties attempted to inflict maximum embarrassment on Johnson.

“In the coming days parliament is likely to be put on the spot to see if it will have an election or whether it will continue to keep the country in zombie-parliament stasis. The only way out is an election and they will be given another opportunity to let the public decide if and when we leave the EU,” said a No 10 source.

Labour has twice voted against motions tabled by the prime minister calling for a snap poll, and Downing Street has sought to portray Corbyn as part of a Westminster elite trying to block Brexit.

Corbyn threw that language back at Johnson in his conference speech on Tuesday, claiming the prime minister is “part of an elite that disdains democracy”.

There were audible intakes of breath when she said Johnson’s advice to the Queen to suspend parliament was, “unlawful, void and of no effect”. Corbyn made a speech from the conference stage almost immediately, calling on the prime minister to resign.

He then brought forward his party conference speech to Tuesday afternoon, using it to issue a rallying cry to activists and prepare the ground for a general election.

The prime minister flatly rejected the idea that he could resign over the defeat, and was backed up by Donald Trump, when the pair held a joint press briefing in New York. Asked if he might step down, Trump said: “I’ll tell you, I know him well, he’s not going anywhere.” Johnson added: “No, no, no.”

Trump went on to say the reporter concerned had asked “a very nasty question”.

The shadow Brexit secretary, Keir Starmer, said the attorney general, Geoffrey Cox should also appear in the Commons to face questions from MPs.

“The prime minister needs to consider his position. He needs to come to parliament straight away and make a statement so we can question him.

He added: “Geoffrey Cox also needs to think about his position, and come and make a statement so that he can be questioned about his legal advice.”

Amid the confusion, Downing Street moved to try and shore up the position of Cox, whose legal advice saying prorogation was lawful was leaked.

“Geoffrey Cox is doing an excellent job and is no way, shape or form to blame for anything that happened,” a No 10 source said.

The Conservatives are due to hold their own annual conference in Manchester next week, with Johnson’s setpiece speech scheduled to clash with prime minister’s questions.

The government would have to win a vote in parliament if it wanted to call a recess to allow Tory conference to go ahead.

Downing Street’s response to the crisis was inconsistent, with one part of the operation claiming that Johnson was infuriated by the position in which he found himself and another senior source claiming that the clash with the courts was not unhelpful to his narrative that he was fighting for Brexit against an obstructive establishment.

There were also mixed messages from Johnson’s inner circle over how far to go in attacking the supreme court judges and accusing them of becoming political, with Robert Buckland, the justice secretary, urging that they should be respected.

The prime minister’s official spokesman downplayed the idea that the judges had interfered in politics, but another No 10 source said: “We think the supreme court is wrong and has made a serious mistake in extending its reach to these political matters. Further, the supreme court has made it clear that its reasons are connected to the parliamentary disputes over, and timetable for, leaving the European Union. We think this is a further serious mistake.”