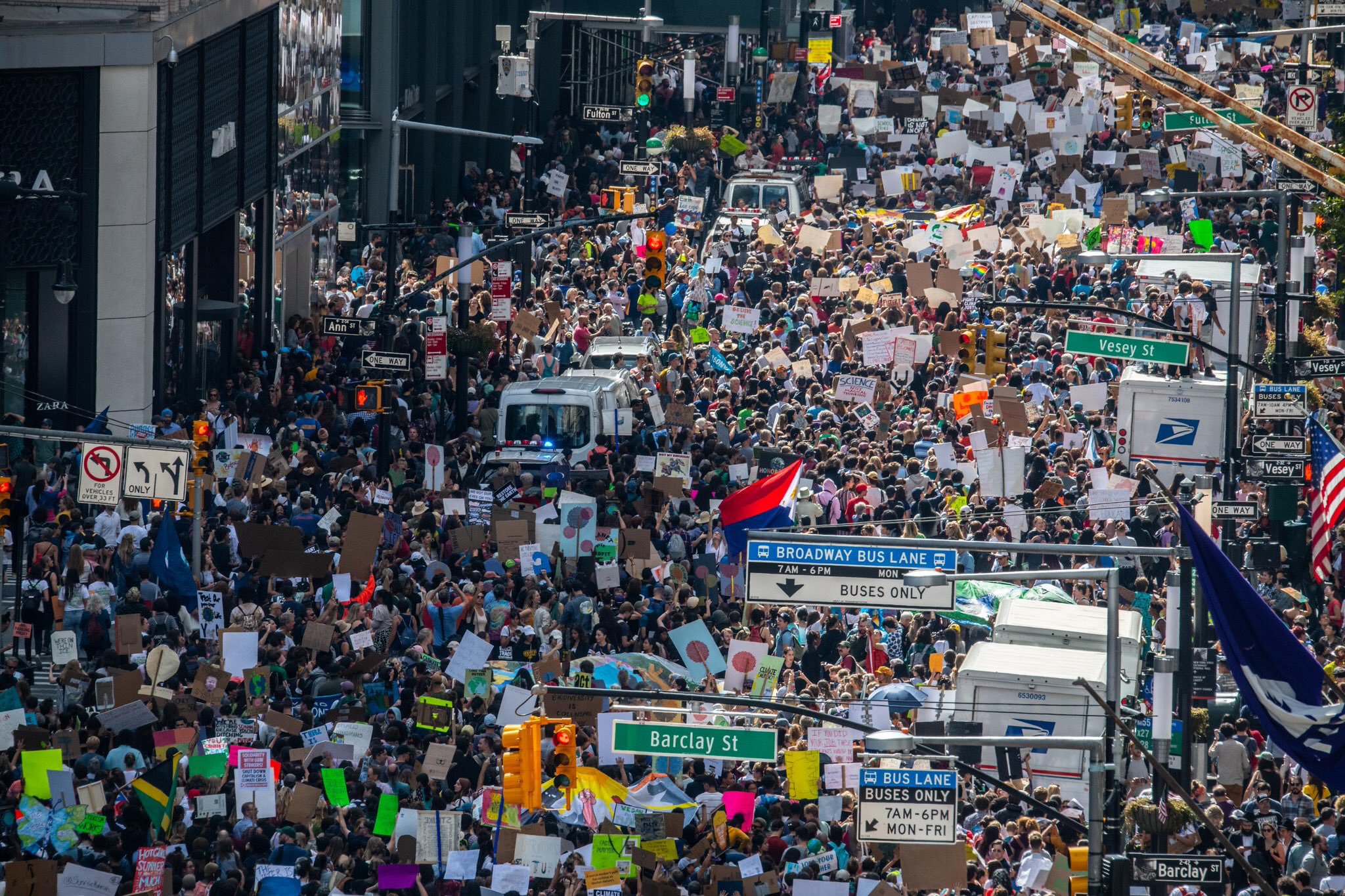 New York: Millions of people all across the globe demonstrated on Friday demanding urgent action to tackle global heating, as they united across timezones and cultures to take part in the biggest climate protest in history.

In an explosion of the youth movement started by the Swedish school striker Greta Thunberg just over 12 months ago, people protested from the Pacific islands, through Australia, across-south east Asia and Africa into Europe and onwards to the Americas.

For the first time since the school strikes for climate began last year, young people called on adults to join them – and they were heard. Trade unions representing hundreds of millions of people around the world mobilised in support, employees left their workplaces, doctors and nurses marched and workers at firms like Amazon, Google and Facebook walked out to join the climate strikes.

In the estimated 185 countries where demonstrations took place, the protests often had their individual targets; from rising sea levels in the Solomon Islands, toxic waste in South Africa, to air pollution and plastic waste in India and coal expansion in Australia.

But the overall message was unified – a powerful demand for an urgent step-change in action to cut emissions and stabilise the climate.

The demonstrations took place on the eve of a UN climate summit, called by the secretary general, António Guterres, to inject urgency into government action to restrict the rise in global temperatures to 1.5C, as agreed under the 2015 Paris agreement.

Carbon emissions climbed to a record high last year, despite a warning from the UN-backed Intergovernmental Panel on Climate Change that there is little more than a decade left to act to slash emissions and stabilise the climate.

Donald Trump will be at the UN headquarters during Monday’s key summit on the climate crisis – but will be there to take part in a meeting on religious freedom instead, in what will be seen by many as a snub.

On Friday, the voices of key political leaders were noticeable by their absence. Instead it was a day for people to set forth their demands, ranging from a ban on new mining in countries like South Africa and Australia, to a “green new deal” in the UK and US to better air quality and more trees in countries like India.

“We are out here to reclaim our right to live, our right to breathe and our right to exist, which is all being denied to us by an inefficient policy system that gives more deference to industrial and financial objectives rather than environmental standards,” said Avinash Chanchal, a young protester in Delhi.

The action began in the Pacific Islands, where citizens have repeatedly asked wealthier nations to do more to prevent rising sea levels. Over the course of the day children and students from Fiji, Samoa, Vanuatu, Kiribati, Tuvalu, Marshall Islands, Tonga, New Caledonia, the Solomon Islands and Papua New Guinea took part in poetry performances, silent protests, sporting events and discussions. Students held placards in Kiribati and chanted: “We are not sinking, we are fighting.”

The demonstrations spread across Australia – the world’s biggest exporter of coal and liquid natural gas – where more than 300,000 people took to the streets in 100 rallies, prompting a tweet from Thunberg – awake in New York – that the “huge crowd” would set the standard.

The Australian finance minister, Mathias Cormann, had said on Thursday that students should stay in class rather than go on strike.

In a retort, Danielle Porepilliasana, a Sydney high school student said: “World leaders from everywhere are telling us that students need to be at school doing work. I’d like to see them at their parliaments doing their jobs for once.”

In Tokyo, hundreds of students and environmental activists marched through the business and shopping district of Shibuya, chanting “Climate Justice!” while holding hand-painted placards made of cardboard with messages such as “Go Green,” ‘‘Save the Earth,” and “the Earth is on fire.”

Smaller rallies were held in more than a dozen cities around Japan, including Kyoto.

No protests were authorised in China, the world’s biggest source of greenhouse gas emissions, but Zheng Xiaowen of the China Youth Climate Action Network said Chinese youth would take action one way or another.

“Chinese youth have their own methods,” she said. “We also pay attention to the climate and we are also thinking deeply, interacting, taking action, and so many people are very conscientious on this issue.”

There was action, however, in Taiwan, where dozens of representatives from primary schools, high schools, and universities gathered in the capital, Taipei, to launch a petition to press candidates in the upcoming presidential election to lay out concrete policies to mitigate climate change risks.

In Thailand, hundreds of young people demonstrated outside the environment ministry in Bangkok and dropped to the ground feigning death.

“We are the future and we deserve better,” said 12-year-old Ralyn ‘Lilly’ Satidtanasarn – who has been dubbed “Thailand’s Greta” for her campaign against plastic bag use in a country where each person uses 3,000 throwaway bags a year.

In India’s capital Delhi, where the suffocating air pollution was the target of the demonstration, Rishika Singh, 18, said: “It’s the poorest who suffer the most. The rich are better off – they make the use of air conditioning and private cars for comfort.”

An armoured personnel carrier was deployed in the Afghan capital, Kabul, to protect about 100 young people as they marched, led by a group of young women carrying a banner emblazoned with “Fridays for Future”.

Fardeen Barakzai, one of the organisers and head of the local climate activist group, Oxygen, said: ”We want to do our part. We as the youth of our country know the problem of climate change.”

In Kenya’s capital Nairobi some young protesters wore hats and outfits made from plastic bottles to highlight the dangers of plastic waste, a major threat to people living in the developing world.

Strikes took place in several Nigerian cities, including Lagos, which is often beset by formidable quantities of toxic waste including thousands of tons of e-waste from the EU.

“Leaders should listen to what the climate scientists are saying. No leader should forfeit the future of younger generation,” said Oladosu Adenike, an activist in the Fridays4Future campaign in Nigeria.

A small but noisy crowd gathered in the financial district of Sandton in Johannesburg, outside the offices of Sasol, a huge South African energy and chemical company.

“We don’t really have a way out of this,” said Natalie Kapsosideris, 16. “The future looks really dismal at this point. There’s not going to be a lot of food available, there will be droughts, floods, natural disasters. The fact that Sasol gets away with stealing our future from us ... and it’s all because they want to make money.”

Demonstrations took place in most European countries, with huge crowds in Warsaw, Poland and more than 1.4 million people taking action across Germany. In Berlin, demonstrators blocked roads and protested outside the German chancellery. In response, Angela Merkel announced a €50bn package of new measures to curb carbon emissions and review progress towards reaching its climate goals by 2030.

Merkel said that as a scientist she had been impressed by Thunberg’s motto “unite behind the science”.

“The chances are very good, they have grown, that we will reach our climate goals this time,” Merkel said. “If we should realise we’re not on track, then we will correct this.”

In Brussels one rather poetic placard read: “Respect existence or Expect resistance!”

Thousands took to the streets in Dublin. Luke Corkery, a university student, said in a tweet: “Blown away ... This is a movement led by young people across the globe. We’re not just looking for an excuse for a day off school or college; we’re standing up for the future of our planet.”

The global protest culminated in New York which was anticipating one of the largest climate strikes. Education chiefs in the city gave every one of the 1.1 million children in its schools permission to attend the climate strike and hear Thunberg speak at a rally at the United Nations headquarters.

The 16-year-old directed her speech to the students in the crowd, though she acknowledged that adults also skipped worked to strike.“We will do everything in our power to stop this crisis from getting worse, even if it means skipping school or work, because this is more important,” she said. “Why should we study for a future that is being taken away from us?”

She sparked laughter when she described all the politicians she had met who asked for selfies and “tell us they really, really admire what we do” yet have done nothing to address the climate crisis. “We demand a safe future. Is that really to much to ask?”

It was estimated that more than 250,000 people turned out for the protests in New York, with thousands more demonstrating in Boston, Miami and San Francisco.

In Mexico City, protesters chanted “Se ve, se siente, la tierra está caliente” – “You see it, you feel it. The earth is getting hotter.” In Brazil, where recent fires in the Amazon have drawn attention to the climate emergency, students attended protests in Rio de Janeiro, São Paulo and the capital Brasília.