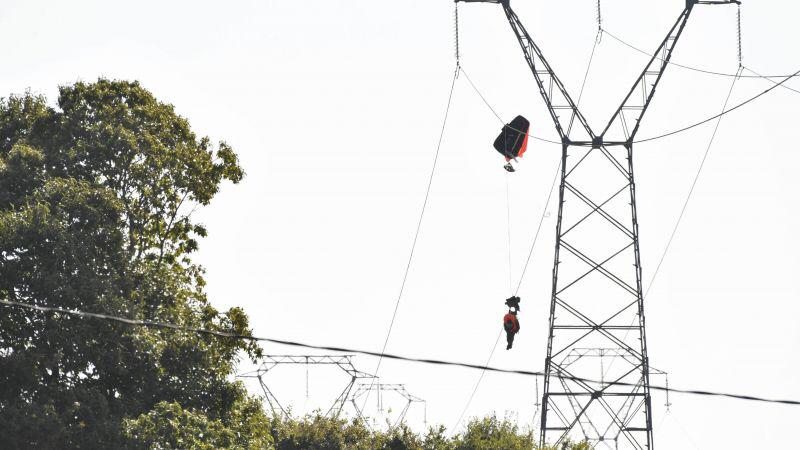 Both pilots were lightly wounded after they ejected from the plane near Pluvigner in Brittany.

The plane had clipped the roof of at least one house before crashing in a nearby field.

The man was eventually retrieved from the power line after a two-hour rescue operation by French emergency services.

The cable was high voltage at 250,000 volts, local media reported.

The plane had been flying at 500m (1,500ft), said the commander of the Belgian air force, Frederik Vansina.

The aeroplane was on a practice flight from Florennes in the Belgian province of Namur to a French airbase at Lorient, some 30km (19 miles) from the crash site, according to Belgian reports.

French news outlet Le Télégramme posted a photo from a great distance away which appeared to show a parachute dangling from a power line near a large pylon.

"They needed time to free him. They had to cut the electric current, but I've been on the phone to him and he says he feels fine," said Gen Maj Vansina. Both pilots were only thought to require hospital checks before being released.

Other photos appeared to show black smoke billowing from the nearby area and a damaged roof on one home, which was reportedly only 50m (164ft) from the site of the crash.

Resident Patrick Kauffer said that a wing of the plane had taken out part of the roof of his house, causing serious damage.

The crash also set fire to his shed and nearby trees, he added.

Belgian Air Force took to Twitter to say that they had begun an investigation into the matter.

"The F16 FB18 was put into use in 1983. It was completely modernized to the MLU standard. The device was meticulously and meticulously maintained according to the manufacturer's diagrams. The investigation into the cause has started."

The plane was not carrying weapons during its flight, officials said.

Built in 1983, the F-16 was apparently in good condition when it took off. The head of the air force said the pilot had told him there had been a problem with the engine during the flight and he had tried to restart it.