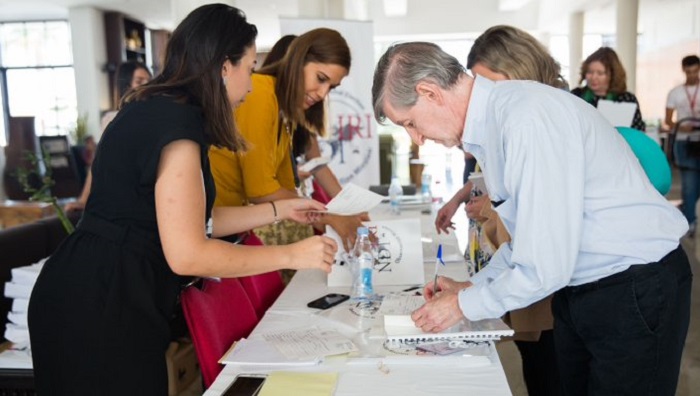 Tunis: The first exit polls in Tunisia’s presidential elections suggest a shock victory for two political outsiders, law professor Kaïs Saïed and media mogul Nabil Karoui, who is on remand in prison on corruption charges which he vehemently denies.

The early results indicate that faced with widespread disillusionment over the country’s progress in the past eight years since its revolution, Tunisians have rejected politicians associated with the country’s two main political trends who have dominated for the last few years, including the moderate Islamist Ennahda party.

The poll, conducted by Sigma Conseil, suggested neither candidate had sufficient votes to declare victory outright, meaning they will both go into a runoff.

The projection gives Saïed, a constitutional law professor without a party, 19.5 per cent of the vote and Karoui 15.5 per cent.

Ranking third was the Ennahda-backed candidate Abdelfattah Mourou on 11 per cent.

The exit poll follows first-round voting on Sunday by seven million Tunisians in the country’s second presidential election since its 2011 revolution, and comes amid widespread disillusion over the country’s progress in the past eight years.

They faced a crowded field of 26 candidates, which also included the incumbent prime minister, Youssef Chahed.

A spokesperson for Karoui was quick to declare that the candidate would advance to the next round. “Today Tunisians said their word and wanted to change the power system ... we have to respect the will of the people ... Nabil Karoui will be in the second round ... we won,” Hatem Mliki told reporters.

Saïed, a conservative, told Radio Mosaique: “My win brings a big responsibility to change frustration to hope ... it is a new step in Tunisian history ... it is like a new revolution.”

With official results not due until Tuesday, the exit polls seem to mark a defeat for the two main political trends who have dominated Tunisia since its revolution in 2011 – Ennahda and its splintering secularist opposition.

For the poll, 70,000 police officers and 30,000-plus troops were deployed around the country where there have been sporadic, but sometimes serious, terrorist attacks in recent years.

In La Marsa, the wealthy seaside neighbourhood of Tunis, early voting on Sunday morning was busy. As the prime minister emerged from a polling station surrounded by a scrum of photographers, Lofti Jalassi, 52, followed with his son. Like many Tunisians during the campaign, he complained about the trajectory of the country since the revolution that launched the Arab spring.

“The last eight years have seen the political parties just running to keep their seats and power,” he said. “They have been chasing corruption while crime and unemployment has been going up and values declining.”

Maha Dakhlaouy, a 25-year-old judge, was more optimistic. She cited freedom of speech, huge steps forward for women’s rights and the choice of candidates.

“It’s extraordinary the choice of candidates we have,” she said. “Yes, the last eight years have been worse than people expected, but not as bad as they were before [during the dictatorship of Zine al-Abidine Ben Ali].

“In the end I thought for a long time about what was the most important issue. And for me that was integrity. So I voted for Mohammed Abbou, who is a lawyer who has fought against corruption.”

The issue of security, along with Tunisia’s persistent economic problems, is cited by many during the last days of campaigning as a source of discontent.

On the beach in the Tunisian resort of Sousse last week, Mohammed Ben Saad, 46, the manager of a water sports rental recalled the terrorist attack that hit this beach in 2015, killing dozens of foreign tourists including 30 Britons, which plunged Tunisia’s tourist industry into an economic crisis from which it has yet to recover.

“I remember everything. The shooting. I remember people trying to escape. I remember the dead and the bodies. It changed everything for us. We used to work six months of the year, now it is only for two months.”

For Ben Saad, the impact of the attack – one of two to target tourists in Tunisia that year – is part of a bigger crisis in the country – an economic and political one that he is uncertain will be resolved by either Sunday’s voting in presidential elections or the parliamentary elections that are due to follow.

“Nothing is good. We don’t like the political and economic situation. Everything is getting more expensive.”

Like the rest of the country, says Ben Saad, he was full of hope eight years ago when Tunisia’s revolution occurred, triggering the fall of Ben Ali.

“I was optimistic, like everyone else in 2011. But then Ennahda came to govern the country. They took a lot of money. They let out a lot of prisoners and shut their eyes to illegal immigration. Four people who used to work with me are in Italy now. Looking at the situation now I’m also thinking of leaving the country.”

It is a feeling of disillusion that has inspired something unthinkable even four years ago: a mounting sense of nostalgia for the days of Tunisia’s former strongman if not for Ben Ali himself.

Political analyst Oussama Hlel believes that the current round of elections represents an important moment for Tunisia.

“We are at a crossroads and are being asked to choose between two paths: whether we want to continue with the process launched by the revolution or whether to change our constitutional arrangements which some candidates are talking about.”

In particular, Hlel notes a new wave of populism in the language of many of the campaigns in response to a growing disillusion with many of the parties that have emerged since the 2011 revolution.

That in turn has been driven by a widespread disappointment with the last coalition government that united different factions of the two winning parties of the 2014 election: the secular and disintegrating Nidaa Tounes party and Ennahda.

The disappointment among voters has not, however, led to disengagement. “On the evidence of the public opinion research we do we have found Tunisians are more determined to vote than ever,” said Les Campbell, one of the joint heads of the US NDI/IRI election observation mission.