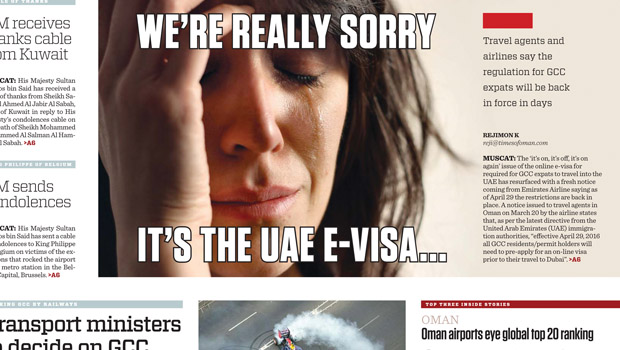 Muscat: Oman’s national carrier has confirmed that GCC expatriates flying to United Arab Emirates (UAE) have to possess an e-visa before boarding the aircraft from April 29.
“The implementation date for the electronic visa required by all UAE airports will be the April 29. This will be applicable to all airlines,” Saleem Amanulla, Vice President Airport Operations at Oman Air, said.
Last Thursday, citing a notice issued by Emirates Airlines and quoting officials from flydubai, Times of Oman had reported that the online e-visa requirement for GCC expats to travel into the UAE will become mandatory from April 29.
Also read: We're really sorry, GCC expats need UAE e-visa
However, an official from Air Arabia, which flies 17 times to Sharjah and six times of Ras Al Khaima every week, said that they have not received any notice from the UAE immigration authorities insisting on e-visa requirement for GCC expatriates before boarding the flight from Oman.
Meanwhile, a travel agent said that when it was introduced last year in October due to technical glitch they were receiving a lot of complaints from the customers, however, now we have to wait and see what will be the situation after April 29.
“Customers say that there are a lot of hassles in processing the online application. And many got their money stuck too,” the travel agent said.
An expatriate in Muscat said that the online visa application portal accepts all applications but it takes a lot of time to approve a visa and issue and sometimes after the long wait it can get rejected too.
“Moreover, if our application gets rejected, we will lose money too. When one of my friend applied he had to pay AED230. After a long wait for weeks, he came to know that his application was rejected. Then when refund was done after a week, he around AED100 in the name of processing charges and other clauses,” Vinod Lal, an Indian expatriate in Muscat, said.
“It’s always a problematic task to apply for online visa to UAE,” Vinod added.
An official from Emirates confirmed on Thursday that a notice has been issued to trade partners in Oman stating that "effective April 29, 2016 all GCC residents/permit holders will need to pre-apply for an on-line visa prior to their travel to Dubai".
The notice also adds that any GCC permit holders (other than the approved 46 nationalities eligible to get visa on arrival), arriving without a pre-applied online visa will not be accepted to travel.
More than one million expatriates in Oman — regardless of their professional status — will now have to apply for an e-visa to obtain entry into the UAE.
In October last year, the UAE introduced the changes related to entry to the emirates for expatriates living in the GCC countries. Under the rules, regardless of the profession, expatriates have to apply online for an e-visa.
Earlier, expatriates holding a certain professional status were eligible to get visa-on-arrival in the UAE - the move though did not affect those from countries with treaties with the UAE, such as the European Union.
However the implementation of the new rules was mired in confusion, with some airlines allowing expats to fly into Dubai and get a visa on arrival while others in Oman blocked passengers from travelling. The system was apparently halted for some time while authorities worked on the online application system.
There was also erratic enforcement at the land border with some expats allowed in, some turned away. The latest notice does nothing to clarify what might happen to travellers by road.
According to the new norms, for getting a UAE visa, a GCC residence entry permit is valid for 30 days before entry from the issuance date, and allows a stay period after entry of 30 days, which can be extended to 60 days.
A GCC accompanied entry permit is valid for 60 days before entry from the issuance date, and the stay period after entry is 60 days, which can be extended by another 60 days.
However, upon arrival, if the GCC residency is found to have expired or cancelled, the entry permit holder shall not be granted entry, and if the profession of the GCC resident is determined to have been amended after the issuance of the entry permit, the holder shall not be granted entry.
The GCC residency must be valid for at least three months from the arrival date and the passport must be valid for at least six months from the arrival date.
Also, checks have to be conducted before allowing entry to foreigners, with temporary passports. However, foreigners possessing only emergency passports will not be allowed entry into UAE. The new rule also stipulates that a GCC resident e-visa is only valid for entry into the arrival/issuance port in UAE.