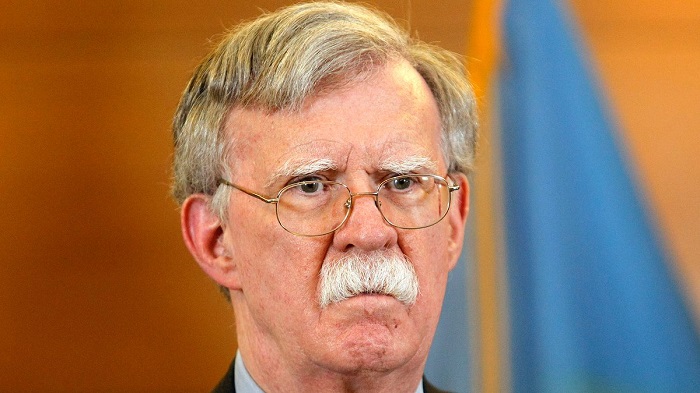 Washington: US President Donald Trump has announced he fired his hard-line national security adviser, John Bolton, saying he disagreed "strongly" with him.

"I asked John for his resignation, which was given to me this morning,” Trump tweeted, adding he would appoint a replacement next week.

But Bolton insisted he had quit and vowed to have his say "in due course”.

He had disagreed with the president on a number of foreign policy challenges, from Afghanistan to Iran.

Bolton, who had served since April 2018, was Mr Trump's third national security adviser after Michael Flynn and HR McMaster.

He maintained he had actually offered his resignation but Trump told him, "Let's talk about it tomorrow.”

As the news broke, Bolton texted a Fox News host live on TV to insist he had resigned as national security adviser.

He also texted reporter Robert Costa to say, "I will have my say in due course" and "My sole concern is US national security”.

The dismissal came as a surprise. Just two hours before his departure was announced, Bolton had been due to host a White House briefing with Secretary of State Mike Pompeo and Treasury Secretary Steven Mnuchin.

The new acting national security adviser will be Charles Kupperman, who was a deputy to Bolton, the White House said.

Sources said the National Security Council, which advises the president, had become a separate entity within the White House under Bolton.

A former senior Trump administration official, who wished to remain anonymous, said: "He [Bolton] operates separately from the rest of the White House.”

According to the official, Bolton did not attend meetings and followed his own initiatives.

A White House official told reporters, "Bolton has his priorities. He didn't ask the president 'What are your priorities?' They're Bolton's priorities.”

A former senior administration official said Bolton's "his way or the highway" approach had infuriated many people inside the White House, including the president.

In the lead-up to Bolton's firing, Trump reportedly approached his predecessor, HR McMaster, according to reports.

The president told the retired general he missed him and asked his advice on national security issues, two anonymous sources familiar with the conversation said.

Bolton, a leading foreign policy hawk, was the chief architect of Trump's hard-line stance on Iran.

He had reportedly opposed the president's recent suggestion that he was willing to talk to Tehran's leaders.

The former national security adviser had also advocated for a much tougher stance on North Korea, Russia and Afghanistan.

Bolton was blamed by US officials for the collapse of a summit in February between Trump and North Korean leader Kim Jong-un in Vietnam by putting forward a list of uncompromising demands that Pyongyang rejected.

Bolton opposed peace talks with the Taliban, which Trump scrapped at the weekend after inviting the group to the US.

According to reports, Bolton had argued that inviting a US-designated terror group to Camp David - the presidential retreat outside Washington - would "set a terrible precedent”.

Bolton had a reputation as a warmonger, and Trump once reportedly joked in an Oval Office meeting that "John has never seen a war he doesn't like”.

Earlier this year, Trump was reportedly angry with the failure of US policy in Venezuela, complaining that Bolton had misled him about how easy it would be to replace President Nicolás Maduro, who has clung to power.