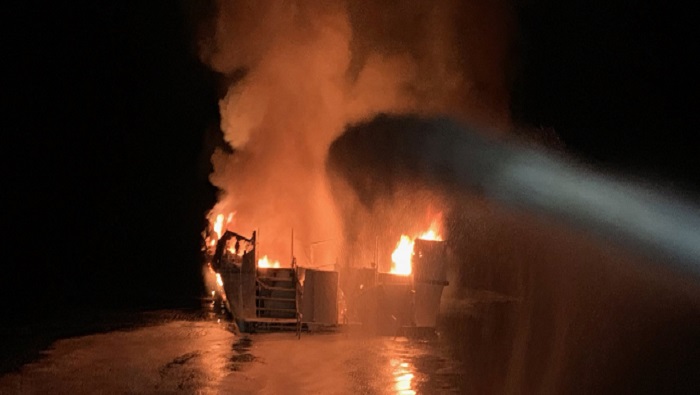 California: Twenty-five people have died and nine remain missing after a boat was engulfed in flames and sank off the coast of Santa Barbara and Los Angeles.

The US Coast Guard said five crew members escaped from the 23-metre (75ft) commercial scuba diving boat but 33 passengers and one other crew member were missing or found dead after the fire early on Monday morning.

As the recovery effort progressed, 25 bodies were found and nine people were unaccounted for, presumed dead, as of late on Monday evening. The Coast Guard official Matthew Kroll said the first bodies recovered had signs consistent with drowning.

The boat was docked near Santa Cruz Island at the time of the fire.

The first four bodies recovered were identified as two adult males and two adult females, but authorities said they would need to carry out DNA tests to identify them. Officials had no other details to share about the missing people, saying the passengers came from across southern California and probably farther away.

Nyx Cangemi, a Coast Guard official, told a British newspaper that by the end of the day authorities had recovered 20 bodies, and the other five had been seen inside the boat but could not yet be reached.

The Los Angeles Coast Guard responded to a mayday call at approximately 3.15am reporting that a vessel was on fire.

“This is probably the worst case scenario you could possibly have,” said Bill Brown, the Santa Barbara county sheriff, noting that the passengers were probably asleep. “We understand the tremendous burden that [families] are under as they wait to determine exactly what happened and what condition ... their loved ones are in.”

Monica Rochester, a Coast Guard official, said: “We will search all the way through the night and into the morning ... We all should be prepared to move into the worst outcome.”

The congresswoman Julia Brownley, who represents the area, was on the scene and met with authorities, who had sent out helicopters and was conducting shoreline searches for the missing people.

“What’s happening here is just about deployment and search and rescue,” she said. “They have a mission.”

Referring to last year’s deadly wildfires, she said: “Sadly we’ve been through two major California fires ... [but] never had this particular kind of emergency.”

Audio of a frantic mayday call captured someone onboard shouting, “I can’t breathe,” before the call was cut off.

A nearby “good Samaritan” pleasure craft picked up the five crew members who were able to escape the ship.

Rochester said the five were awake on the bridge of the vessel when the flames were spotted and were able to jump off. The passengers reported missing were asleep below deck.

While firefighters brought the blaze under control, the vessel sank 20 metres off shore in more than 15 metres of water, the Coast Guard said.

By Monday afternoon, only a portion of the bow was sticking out of the water.
The Ventura county fire department released dramatic pictures on Twitter on Monday morning, showing the boat engulfed in smoke and flames.

A Coast Guard senior official, Aaron Bemis, told an American news channel the fire kept appearing to be extinguished and then burst back into flames, possibly because of the amount of fuel on the ship.

“The fire was so intense that even after it was put out, we were not able to actually embark the vessel and look for survivors at [that] point,” he said.

The boat was being used for a three-day diving tour of islands, including Santa

Cruz Island, according to the Truth Aquatics website. Passengers boarded the boat at Santa Barbara Harbor on Friday night, and the vessel had been due to return to Santa Barbara late on Monday afternoon.

California Diving, a local publication, described the boat as “California’s crown jewel of live-aboard dive boats” when it was built in 1981.
Rochester said the boat was in “full compliance” with regulations.

The US Coast Guard was “working deliberately with the vessel owner/operator, who is with us at the time working on a plan to conduct further assistance for his vessel”, she said.

Authorities set up a family assistance point at an event center in Santa Barbara. Officials said they did not have much information they could share, but

were there to provide support.

“People are coming in wanting information,” said Suzanne Grimmesey, an official with the Santa Barbara department of behavioral wellness. “There are a lot of unknowns across the board.

“We are hoping to help them cope with what they are experiencing. We have clergy, we have chaplains, we have Red Cross, we have hospice care.”

People in Santa Barbara placed flowers and candles at the harbour where the Conception used to dock.

Orlando Aldana, who lives in the city and often comes to the harbour, brought 34 candles to the makeshift memorial to honour each victim. “These will be lit up all night for them,” he said.

He said he was still struggling to process the news: “It’s the last thing that you think would happen. I’m just praying for all of them.”