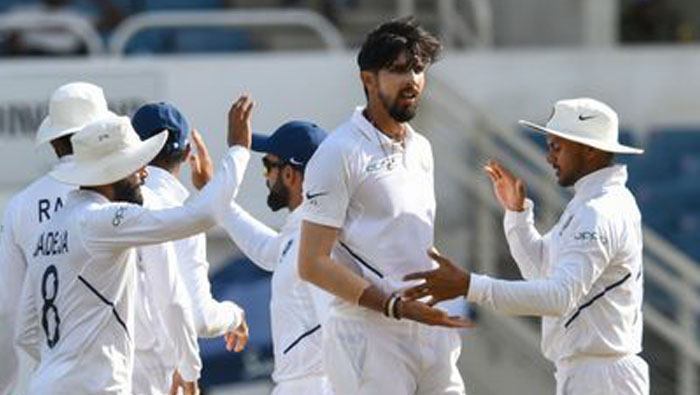 The day began with West Indies in a world of trouble at 87/7, from which they could add ten more runs before losing another wicket: Rahkeem Cornwall was dismissed by Mohammad Shami, his 150th scalp in Test cricket. Ishant Sharma claimed his first scalp just four balls later, dismissing debutant Jahmar Hamilton for a 59-ball 5.

West Indies were soon bowled out for 117, as Ravindra Jadeja sent back Kemar Roach for his first scalp of the day. Beginning their second innings with a 299-run lead, India lost Agarwal early, as Roach trapped him lbw for 4. KL Rahul, Agarwal's opening partner, tried his best to subvert the West Indies new ball bowlers alongside Cheteshwar Pujara.

The opener struggled to get going, though, and scored just six runs in just 63 balls before falling to Roach in the 21st over. Virat Kohli then took guard, but departed for a golden duck in an identical fashion to Rahul: caught-Hamilton-bowled-Roach. Pujara's struggle for form continued, as he was dismissed for 27 by Jason Holder, with India reduced to 57/4.

Adding to his five wickets in the first innings, Holder extracted extra bounce to get an edge from Pujara's bat, which flew to Shamarh Brooks at third slip. Ajinkya Rahane and Hanuma Vihari, however, steadied the ship thereon, adding 111 runs for the fifth wicket. Vihari, who scored a century in the first innings, impressed once again, reaching his fifty in the 50th over of the innings.

It wasn’t long until the visitors made their first breakthrough in the chase, as Sharma had Kraigg Brathwaite caught behind with the score on 9.

Darren Bravo then joined John Campbell, and the pair scored at around five-an-over until Campbell departed for 16. Bravo (18*) and Shamarh Brooks (4*) then got the hosts to stumps without further hiccups, with the scorecard reading 45/2.