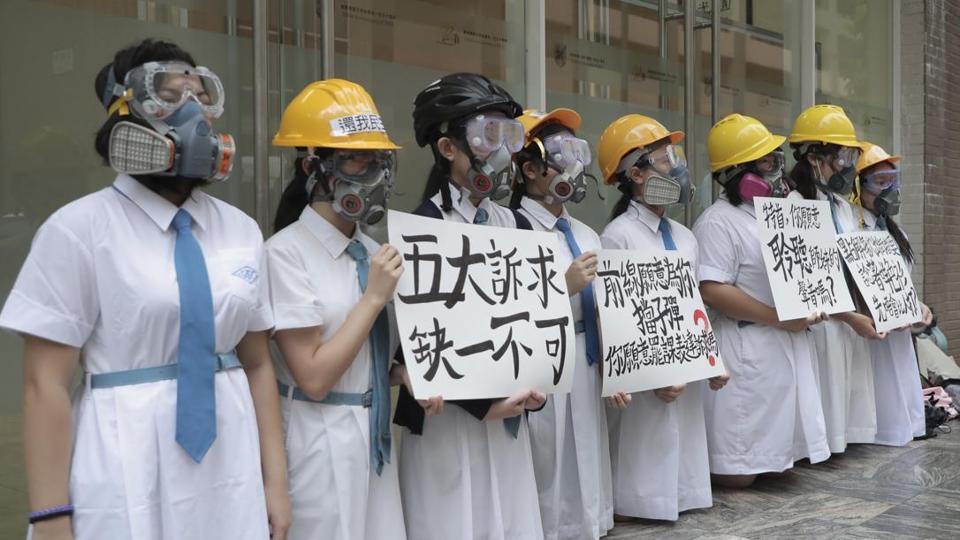 Hong Kong: Thousands of students in Hong Kong have boycotted the first day of the new term in a fresh wave of protests, after a tense weekend of violent clashes between police and demonstrators.

On Monday, university and secondary students marked the end of their summer break by skipping classes and holding rallies to call on the government to withdraw a controversial extradition bill, among other demands.

“If you are not a slave, don’t act like one,” said one speaker, a woman introduced only by her surname Chiu, from an alumni group, who urged students to continue to fight for their freedoms. A stage behind her featured part of a saying by Mao Zedong: “A single spark can start a prairie fire.”

“We should not give up, whatever happens,” said Brian Cheung, 16, who has been protesting throughout the summer and came out to support the boycott.

In a park across the city, outside of the government’s headquarters, hundreds of people gathered in solidarity with students for a workers’ rally. Demonstrators have also called for a city-wide strike on Monday and Tuesday.

Tensions were running high after a weekend of some of the worst confrontations of the protests. After running battles on Saturday, in which protesters threw petrol bombs and lit fires, police targeted protesters and commuters in metro stations, beating them with batons. On Sunday, protesters paralysed transport links to Hong Kong airport.

Riot police patrolled stations of the city’s mass transit railway network as protesters blocked train doors from closing, causing delays and throwing morning rush hour into chaos. Police were seen arresting at least one group of protesters as well as searching people on the street.

While university students called for a two-week boycott, secondary students have vowed to protest for one day a week until demonstrators’ demands are met. Organisers estimated at least 9,000 secondary students from more than 200 schools would be participating in the boycott.

On Monday morning, secondary students kneeled, held hands, and chanted in the rain outside their schools amid a typhoon warning that had closed many primary schools.

In Kowloon, dozens of students and alumni stood outside the Ying Wa College for Boys, chanting: “Free Hong Kong! Democracy Now!” Some had painted one side of their goggles red, in reference to a woman who was reportedly blinded in one eye while protesting. One held a sign with the Bible verse: “Blessed are those who are persecuted because of righteousness, for theirs is the kingdom of heaven.”

“We are willing to give up our dignity just to beg the society to change,” said Thomas Loh, 17, one of the students who helped organise the boycott at his school. Loh said they planned to continue their boycott on Tuesday, with issues such as press freedom and how students felt about the protests on the agenda.

As the protests continue, the authorities appear to be cracking down harder, with more than 1,000 people arrested since the demonstrations began in June. In a press conference on Monday, police said they arrested 159 people over the weekend, including a 13-year-old boy found with two petrol bombs.

On Monday, the Chinese foreign ministry spokesperson, Geng Shuang, said in a regular news briefing that demonstrations in Hong Kong had “completely exceeded the scope of freedom of assembly”. “They have evolved into extreme and violent actions,” he said, reiterating Beijing’s support for the Hong Kong government and police.

In an English language editorial on Sunday, the Xinhua state news agency said “the end is coming for those attempting to disrupt Hong Kong and antagonise China”.

The pro-democracy movement scored a rare win on Monday when a court overturned an order barring Agnes Chow, an activist and former student leader in the 2014 pro-democracy protests, from running for a seat in Hong Kong’s legislature.

Chow was among a group of prominent democracy figures, including another former student leader Joshua Wong, arrested on Friday.

The shift of the protests to school campuses comes as Chinese officials blame the movement on the city’s liberal education curriculum.

In recent weeks, Beijing has criticised teachers and parents for not instilling patriotic values in students and called for an overhaul of Hong Kong’s education system, which includes topicssuch as the Chinese military’s violent crackdown on democracy demonstrators in Tiananmen Square in June 1989.

Secondary students were preparing to hold “civic lessons” to educate their younger peers who have not followed the protests as closely. Students said they would soon escalate their actions if the government continued to refuse protesters’ demands, which include the formal withdrawal of the bill and making democratic reforms.

"For now, we are still boycotting under the school but escalation means not only do we boycott ... we have to paralyse the teaching institutions,” said Kinson Cheung, 18, a university student who had come to support the secondary students at Ying Wa.

At the gates to the school, teachers watched as students handed out permission slips for parents to sign allowing the students to skip lessons. Others schools have reportedly banned their students from attending the boycott.

Loh said: “I was once a so-called ‘Hong Kong pig’, someone who only wants to live peacefully and cares more about the economy than politics, but now I realise how important this home and the freedom I enjoy here is to me.” He added: “I really hope Hong Kong can once again be a free city.”