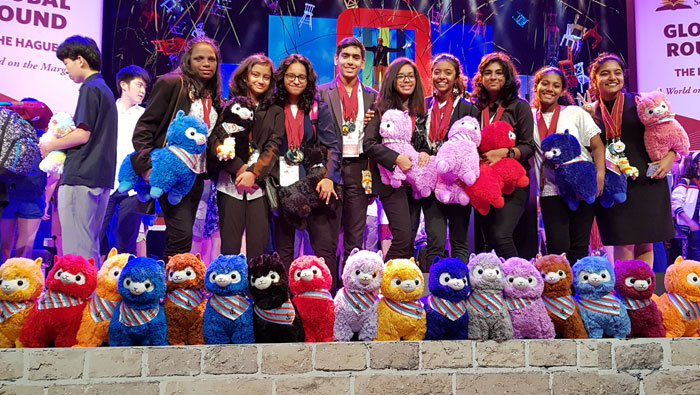 Muscat: Students of Indian School Al Ghubra in Muscat have won laurels in the global round of the World Scholar’s Cup, which was held at The Hague in the Netherlands.

The event, which showcased more than 2,500 students from 51 countries revolved around the theme ‘A World on the Margins.’

The students bagged 56 gold medals and 81 silver mdeals, with seven of the nine participating teams from ISG having qualified for the Tournament of Champions, which will be held at Yale University in the USA this November.

In addition, Alisha Amjad was adjudged a ‘WOW Debator’ and a member of the judging panel for the debate showcase. The team comprising of Meethi Sharma, Aashka Pankil Shah and Leah Varghese were declared the third best qualifying team from the Middle East.

The participants emerged victorious in competitive events such as the team debate, collaborative writing, scholars’ challenge and scholar’s bowl. In the scholar’s scavenge, scholars were teamed with participants from other countries to explore a quintessentially Dutch venue (in this case, Rotterdam Zoo) and undertake a series of quirky challenges.

Azza Luqman, Anoushka Anish, Pallak Dabalia, Meethi Sharma, Zainab Hussain, Fida Ayisha, Niharika Lathish and Ankitha Anil exhibited their unique talents to the global community during the Scholars Show. The cultural fair was a chance for scholars to experience a plethora of customs and traditions practiced across the world.

The city tour showcasing the scenic beauty of Amsterdam was enthralling. The icing on the cake was the scholar’s ball where scholars from all over the world celebrated with joy. ISG scholars await more glory and acclaim at the upcoming Tournament of Champions.