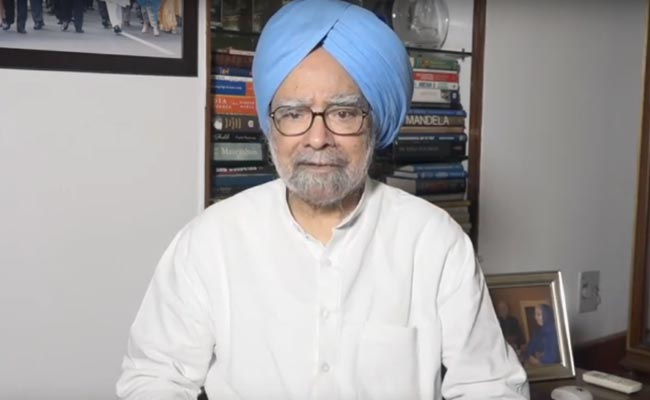 New Delhi: Slamming the economic policies of the Modi government, former Indian Prime Minister Manmohan Singh on Sunday said that the state of the Indian economy is deeply worrying and that the last quarter’s GDP growth rate of 5 per cent signals that India is in the midst of a prolonged slowdown. Manmohan Singh in a video statement on Twitter lashed out at the government for an “all-round mismanagement” highlighting the manufacturing sector’s growth “tottering at 0.6 per cent,” he said, adding that “this makes it very clear that our economy has not yet recovered from the man-made blunders of demonetisation and a hastily implemented GST.”

Manmohan Singh stressed that the domestic demand is depressed and consumption growth is at an 18-month low while the nominal GDP growth is at a 15-year low. “There is a gaping hole in tax revenues. Tax buoyancy remains elusive as businessman small and big are hounded and tax terrorism continues unabated. Investor sentiment is in the doldrums. These are not the foundations for economic recovery,” he added in the video tweet posted by Congress.

India’s GDP growth was 5 per cent in the first quarter of FY20 vis-a-vis 5.8 per cent in the previous quarter. The growth in the quarter ended June 30 last year stood at 8.0 per cent.

Manmohan Singh also blamed the Modi government’s policies leading to “massive jobless growth” with over 3.5 lakh jobs being lost in the automobile sector alone. He also stressed on farmers not getting adequate prices and that the rural incomes have declined. “The low inflation rate that Modi government likes to showcase comes at the cost of our farmers and their income by inflicting misery on over 50 per cent of India’s population,” he said.

The veteran Congress leader said that India has the potential to grow at a much faster rate and that its youth, farmers, farmworkers, entrepreneurs and the marginalised section deserve better. “Therefore, I urge the government to put aside vendetta politics and reach out to all sane voices and thinking minds to steer our economy out of this man-made crisis,” Manmohan Singh said.