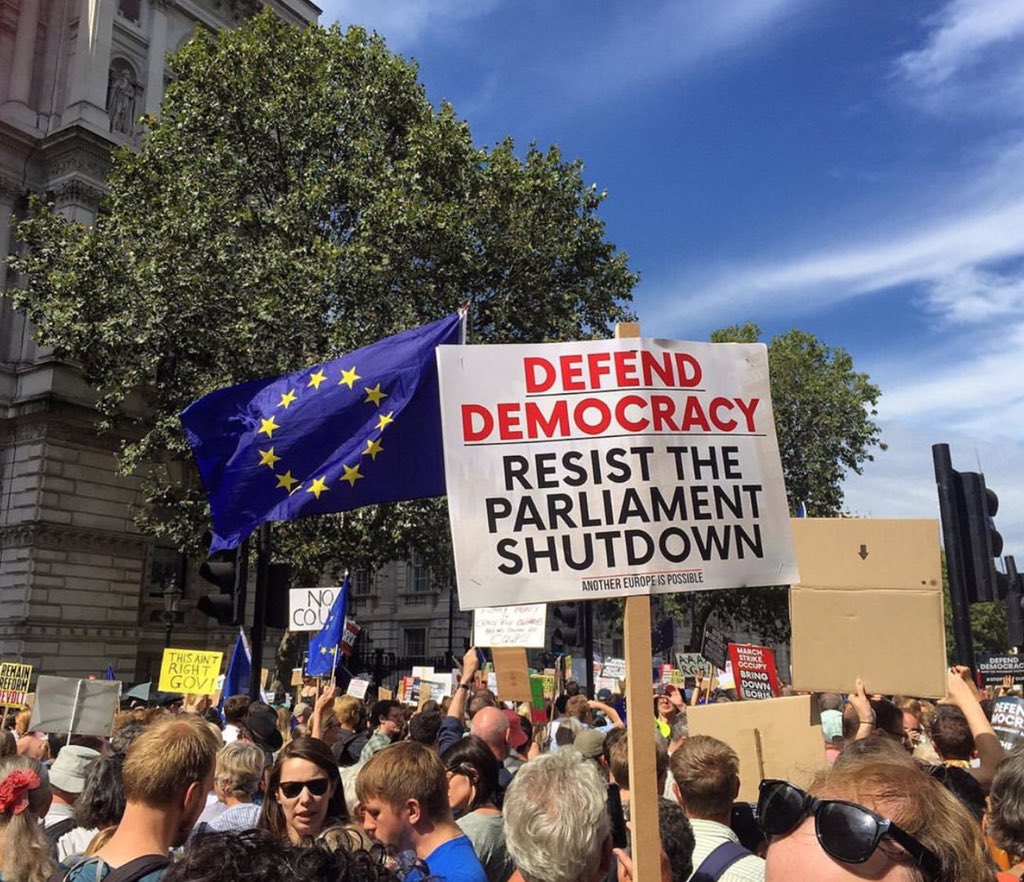 London: From Bodmin to Berlin, Bristol to Oxford, tens of thousands of people took to the streets in towns and cities across England, Scotland and Wales on Saturday to vent their fury at Johnson’s plan to suspend parliament. Around 1,200 people attended the rally in Cambridge, where they booed the prime minister and his adviser Dominic Cummings as though they were pantomime villains.

Demonstrations more than 1,000-strong were seen in cities including Manchester, Newcastle and York, where a crowd carrying EU and Yorkshire flags convened outside the famous Bettys tea rooms.

Others were held in Amsterdam’s Dam Square, outside the British embassy in Latvia’s capital Riga, and beside the Brandenburg Gate in Berlin. In the German capital one protester waved a banner that read: “The last time this happened, Cromwell discontinued the custom of kings wearing their heads on their shoulders.”

The anger was particularly vocal in London. Outside Downing Street, demonstrators chanted “Shame on you”. Momentum, which backs Jeremy Corbyn, told its 40,000 members to “occupy bridges and blockade roads”. Within hours, a sizeable group had brought Trafalgar Square to a standstill by sitting in the road.

Loney, who has a Slovakian son-in-law, said: “I feel that prorogation is cutting off our legs for any form of protest and the legs of parliament. I think that Boris Johnson is trying to hold Europe to ransom.

“What they actually should be doing is someone with a brain needs to stand up and say: ‘Sorry folks, we actually got it wrong.’ It [leaving the EU] isn’t the best thing for the country, it never was.”

Costar, who is half-German, added: “I have a dual-national grand-daughter and I’m here for her. She’s two-and-a-half.”

In Bristol, a boisterous 5,000-strong procession marched through the city centre shouting: “What do we want? Democracy! When do we want it? Now!”, “Boris Johnson, shame on you” and “Hey, hey, ho, ho, Boris Johnson’s got to go”.

Many were old hands, who had been to lots of Remain protests. But others were taking to the streets for the first time. Will Roberts, 39, who was with his wife and two children, had preferred to let the democratic process take its course. “I was disappointed with the result but this is worse than Brexit itself. Hand on heart, this is really frightening. If you know a bit of history, you’ll know this is the thin end of the wedge.”

Kevin Byrne, a retired teacher, said: “I’m 80 and this is the first time I’ve been on a demonstration. I’m feeling a bit hesitant but what is happening is appalling. It is against all the democratic principles I’ve been brought up with.”

The prime minister’s old Oxford college, Balliol, was targeted. Surrounded by undergraduates, Lesley McKie, 55, said: “Being outside the very institution where he developed a political profile with students at the college today denouncing him sends a powerful message to Johnson and the others leading this coup.”

McKie added: “I’m here today with my family. My teen daughters deserve to live in a democracy and we’re here to protest against the undemocratic actions of Boris Johnson and Dominic Cummings.”

In Newcastle, Chris McHugh, from Gateshead, said he was attending to “protect democracy”. The 33-year-old, who works for the Labour MP Liz Twist, said: “The fact that thousands have taken to the streets of Newcastle today is so telling. People from all walks of life have come together ... there’s a real sense of unity, whether you voted Leave or Remain, this is about protecting the very fabric of our democracy.”

Protests were also held in Birmingham, Liverpool, Glasgow, Swansea, Leeds, and Aberdeen. Jeremy Corbyn addressed large crowds in Glasgow’s George Square, stating: “No way do you take us out without a deal – we will stop you and give the people their rights and their say to determine their future.

“[We are] angered that the government and a prime minister elected by 93,000 members of the Tory party is trying to hijack the needs, aims and aspirations of 65 million people. Well, think on Boris, it’s not on and we’re not having it.”

In Cambridge, Jasmina Makljenovic, who is British, was tearful as she said: “This is about my children and their future. Boris Johnson is dangerous. This is not how democracy should work. There are dictators everywhere in the world. How on earth do people think they got into power? This is how it happened: slowly and gradually. We are like boiled frogs. Slowly we are being cooked and our freedoms are being taken away.”

Diane Abbott, the shadow home secretary, spoke from a stage positioned near Downing Street, saying: “Let me tell you, before too long Jeremy Corbyn will be in 10 Downing Street and Boris will be gone.”

Laura Parker, national coordinator of Momentum, told protesters: “This is our democracy and we will not let an unelected prime minister manage this power grab. He wants to shut the system down and hide ... We know where you live, Mr Johnson.”

In an op-ed, Michael Chessum, an organiser of the protests, said they were merely the start of a national fightback. “We are now witnessing the growth of a huge movement in defence of democracy. From Monday, we will be protesting every single day at 5.30pm all over the country. You can join us at

Further mass demonstrations, organised by the People’s Assembly Against Austerity, are planned to take place on 3 September, Tuesday to coincide with MPs returning to Westminster from their summer break.

The protests were triggered by Johnson’s decision to suspend parliament for up to five weeks before the 31 October Brexit deadline, which opponents say is designed to stop MPs preventing Britain leaving the EU without a deal.