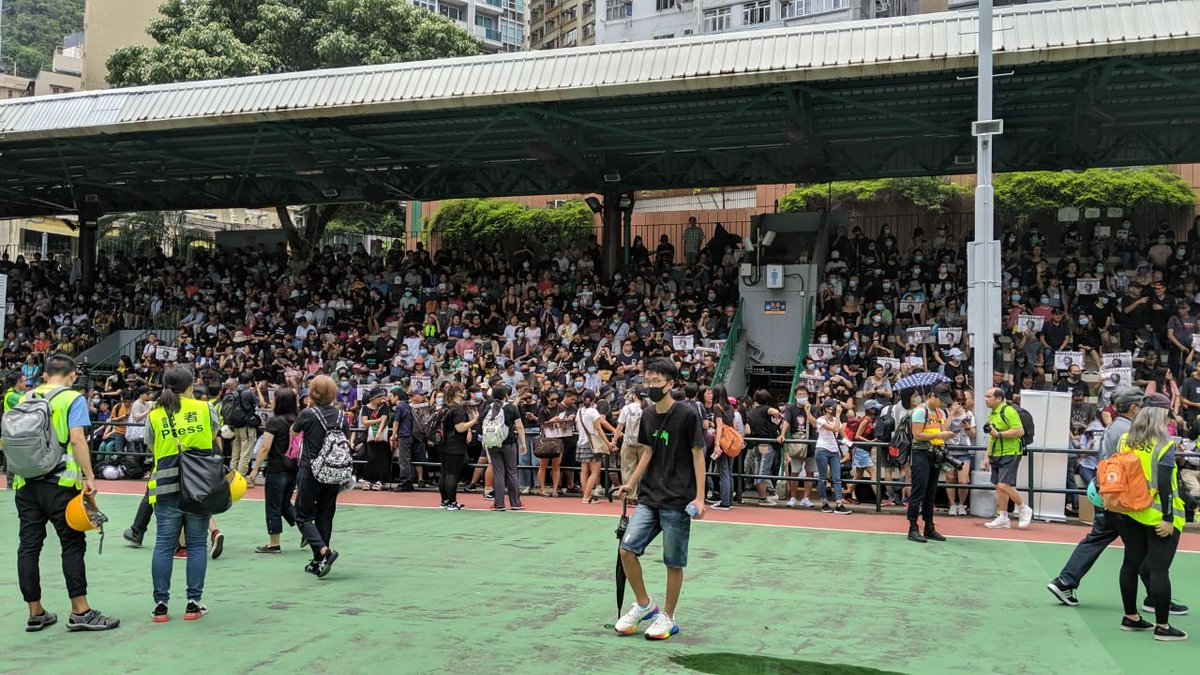 Hong Kong: Hong Kong riot police have stormed a metro station, using batons to beat passengers as violent clashes deepened political unrest in the city for the 13th weekend in a row.

Lai, 31, returning home from protests, was in a train car that pulled into the Prince Edward mass transit railway stop in Kowloon just before 11pm on Saturday night. He saw at least 20 police officers on the station platform when suddenly five or six ran into his carriage.

“Everyone started to scream ‘they are coming, they’re crazy’,” Lai said. “They kept moving and hitting everyone in the car. I started running. I saw police using their batons to keep hitting the same person on the head, even though he was kneeling down in the corner,” he said.

Video footage showed police pepper spraying protesters inside the train car, chasing and arresting others on the train platform and ordering them to kneel against a wall with their hands on the heads. One man could be seen bleeding from the head.

In a statement, police said they had entered the station after protesters damaged a customer service centre and ticket machines, as well as assaulted members of the public. Before police stormed the car, protesters had argued with a man wielding a hammer at the station, according to local media.

Police said in a statement on Sunday that 40 people were arrested at Prince Edward station. It also said that two live rounds were fired on Saturday night - warning shots by two police officers who were surrounded by protesters trying to steal their pistols.

Saturday’s clashes come after almost three months of mass protests, triggered by a bill that would allow extradition to mainland China. The demonstrations have plunged Hong Kong into its most serious political crisis in decades. The Hong Kong government, backed by Beijing, has ramped up their tactics on protesters who have also escalated their methods, throwing petrol bombs and bricks on Saturday.

As helicopters hovered overhead, protesters clashed with police in various locations throughout the city as they took to the streets in defiance of a police ban and marked the anniversary of a decision by Beijing to limit democratic reforms in the semi-autonomous Chinese territory.

Earlier in the day, thousands of protesters had surrounded government headquarters, shining lasers at the building, taunting police, and throwing objects into the complex.

Police fired multiple rounds of tear gas from inside the compound, shrouding a six-lane traffic artery in gas while protesters threw the canisters back. The police also deployed water cannons, spraying protesters with blue dye, a method of marking them for later arrests.

After retreating from the government complex, hundreds of protesters surrounded the police headquarters where they built a barricade of plastic barriers, traffic cones, and other debris across a road and set it alight, sending plumes of black smoke into the sky until firefighters put the blaze out. Clashes continued throughout the night as police in various locations chased protesters, pinning them to the ground to arrest them. Undercover police dressed as protesters were seen firing rounds of pepper spray on demonstrators, who attacked them with umbrellas. Police reportedly fired at least one live round in a warning shot outside Victoria Park.

A march earlier in the day was peaceful, attended by families, middle-aged and elderly residents. The march had originally been called off by the organiser, Civil Human Rights Front, after police arrested prominent pro-democracy lawmakers and activists, including Joshua Wong, a student leader in the 2014 pro-democracy protests known as the umbrella movement.

Demonstrators marched despite heavy rain, following parts of the original route. Jackie, a protester who had brought her mother to the march, said: “Our government hasn’t replied to any of our demands ... we are in a corner and we can’t do anything apart from coming out to the street every single weekend.”

Critics have begun comparing footage of the police storming the train station to an episode in July, when dozens of masked men in Yuen Long, an outskirt of Hong Kong, beat commuters with rods – an incident that spurred more protests.

Despite the arrests and harsher police tactics, protesters said they would continue to make their demands, which include the permanent withdrawal of the extradition bill.

“If we stop now, only punishment awaits us,” said Sonny Lai, 21, a protester who was wearing plastic body armour, a gas mask and gloves and was holding boxing pads.

Hong Kong’s leader, Carrie Lam, has hinted that a draconian emergency law could be enacted, giving the government sweeping powers to crack down on demonstrators.

“They are trying to crack down on the movement as soon as possible, and they just don’t want to give any concessions to Hong Kong people,” said Lo Kin-hei, the vice-chair of the Democratic party.

Observers believe Beijing is anxious to stop the protests before 1 October, which marks 70 years since the founding of the People’s Republic, a politically important anniversary.

“If we don’t stand up now, it’s going to be too late,” said Simon Chang, a protester in Wan Chai, where earlier in the day hundreds had filled a sports stadium, holding posters featuring Lam with a bloodied eye – a reference to a protester who was blinded in one eye.

Another protester, who asked not to give her name, said: “Even if they arrest more people, that won’t stop us. They keep arresting people, making us more angry. We will keep coming out.”According to recent reports, Beijing has ordered Lam not to concede to any of the protesters’ demands, including more politically feasible ones such as the permanent withdrawal of the extradition bill, which officials have already announced dead, or an independent inquiry into police behaviour toward protesters.

Chan said he believed Beijing was holding Lam back because meeting any demands would “create a feeling that we are able to do something against the government”. He added: “And they don’t want this sentiment to spread.”

Saturday marks five years since China handed down a proposal to introduce democratic elections in Hong Kong, as laid out in the basic law, the territory’s mini constitution, and promised by previous leaders.

China’s proposal allowed for popular election of Hong Kong’s leader, the chief executive, but only among candidates chosen by an election committee dominated by pro-Beijing members. The proposal kicked off the umbrella movement, which paralysed parts of the city for 79 days.

As police and protesters clashed in the early evening, the government said “rashly” implementing universal suffrage, one of the demands of the demonstrators this summer as well as in 2014, was “irresponsible” and would only “further polarise society”.

“Any discussions on constitutional development have to be premised on the legal basis, and be conducted under a peaceful atmosphere with mutual trust,” it said in a statement.

This summer’s demonstrations have now lasted longer than the umbrella movement, surprising both protesters and residents with its momentum. Protesters said the turnout on Saturday showed the movement was still going strong.

“You can see a lot of Hong Kong people still coming out today. They are not afraid,” said Elsa Chu, 38, who was protesting outside of the government headquarters.

“Hong Kong people know that if we are afraid, we will have nothing. We will stay together to protest and protect our home,” she said.