Hundreds of thousands to protest Johnson’s move to suspend parliament 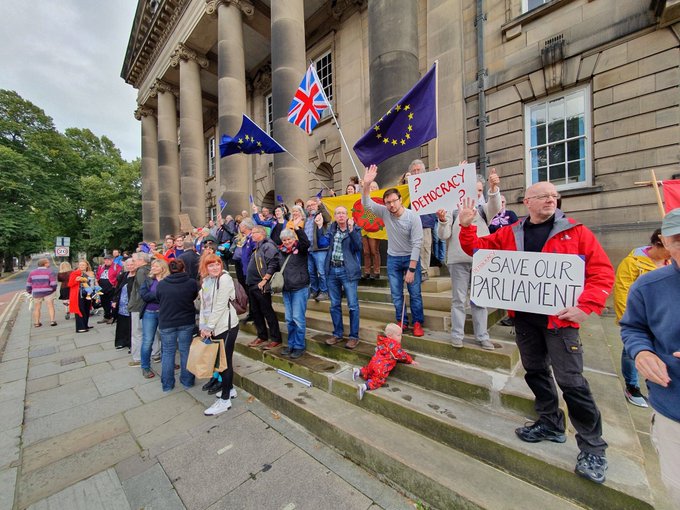 London: Hundreds of thousands of demonstrators are expected to take to the streets across the country on Saturday to protest against Boris Johnson’s move to suspend parliament.

Organisers are backing the use of civil disobedience during the wave of protests, in which demonstrators will “resist the parliament shutdown” in dozens of towns and cities.

The shadow chancellor, John McDonnell, will be among high-profile speakers addressing demonstrators massing outside the gates of Downing Street.

Jeremy Corbyn threw his weight behind the protests, saying: “The public outrage at Boris Johnson shutting down democracy has been deafening. People are right to take to the streets – and I encourage everyone to join the demonstrations in London and across the country tomorrow.”

One Facebook group for the event, called “Stop the coup, defend democracy”, said: “Boris Johnson is trying to shut down our democracy so that he can deliver on his Brexit agenda. We can’t just rely on the courts or parliamentary process to save the day. We all have a duty to stand up and be counted.”

Protests are planned in Birmingham, Manchester, Liverpool, Newcastle, Bristol, Glasgow and Swansea, among more than 80 planned demonstrations due to take place over the next week.

Critics have accused Johnson of trying to circumvent parliamentary democracy to stop MPs blocking a no-deal Brexit. The protests are being organised by a series of groups including Momentum, the grassroots campaign organisation set up to support Corbyn.

Laura Parker, Momentum’s national coordinator, pledged to “shut down the streets”. She said: “We have a barely elected millionaire prime minister who is happy to exploit a loophole in our flawed democracy to force through a Trump-first, no-deal Brexit. He is part of the same tiny, privileged elite which has been hoarding power at the top and eroding our democracy for decades.

“There are thousands of people from all over the UK and across the political spectrum who will protest to stop Johnson close the doors on our democracy.”

Michael Chessum, a Momentum activist who runs the campaign group Another Europe is Possible, which is also behind the protest, told reporters that he supported peaceful civil disobedience at the demonstrations. The self-described “hard-left, hard-remain” campaigner said: “I think it’s an essential part of any successful protest movement. Ultimately, a successful protest movement isn’t about asking nicely. Boris Johnson is not amenable to some kind of intellectual conversion, he is out to dismantle democracy to deliver his vision of Brexit.”

He added: “When democracy is under threat, people have to take matters into their own hands as well. I think it’s a really nice atmosphere. People are angry, they’re energetic, but they’re also good-natured. It’s a very peaceful atmosphere as well, so I’d anticipate that kind of thing will continue.”

Izzy Warren, of the UK Student Climate Network, which is also backing the protests, said: “We need a well-functioning parliament and strong democratic structures to successfully prevent irreversible climate breakdown. Shutting down parliament to force through political agendas is the antithesis to what is needed, and is exactly why young people are furious at the very same politicians failing to take the climate crisis seriously.”

Scotland Yard said: “A proportionate policing plan is in place. Any public order incidents will be dealt with appropriately.”