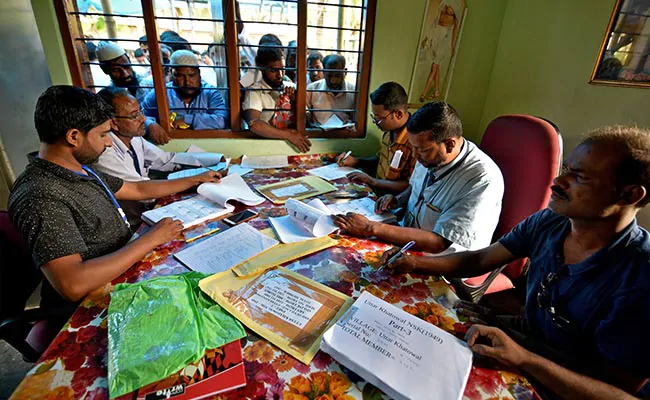 Dispur: India has published the final version of a list which effectively strips about 1.9 million people in the north-eastern state of Assam of their citizenship.

The National Register of Citizens (NRC) is a list of people who can prove they came to the state by 24 March 1971, a day before neighbouring Bangladesh declared independence from Pakistan.

People left off the list will have 120 days to appeal against their exclusion.

It is unclear what happens next.

It has already detained thousands of people suspected of being foreigners in temporary camps which are housed in the state's prisons, but deportation is currently not an option for the country.

The process has also sparked criticism of "witch hunts" against Assam's ethnic minorities.

The NRC was created in 1951 to determine who was born in Assam and is therefore Indian, and who might be a migrant from neighbouring Bangladesh.

The register has been updated for the first time.

Families in the state have been required to provide documentation to show their lineage, with those who cannot prove their citizenship deemed illegal foreigners.

Prime Minister Narendra Modi's Bharatiya Janata Party (BJP) has long railed against illegal immigration in India but has made the NRC a priority in recent years.

Assam is one India's most multi-ethnic states. Questions of identity and citizenship have long vexed a vast number of people living there.

Among its residents are Bengali and Assamese-speaking Hindus, as well as a medley of tribespeople.

A third of the state's 32 million residents are Muslims, the second-highest number after Indian-administered Kashmir. Many of them are descendants of immigrants who settled there under British rule.

But illegal migration from neighbouring Bangladesh, which shares a 4,000-km-long border with India, has been a concern there for decades now. The government said in 2016 that an estimated 20 million illegal immigrants were living in India.

Residents excluded from the list can appeal to the specially-formed courts called Foreigners Tribunals, as well as the high court and Supreme Court.

However, a potentially long and exhaustive appeals process will mean that India's already overburdened courts will be further clogged, and poor people left out of the list will struggle to raise money to fight their cases.

If people lose their appeals in higher courts, they could be detained indefinitely.

Some 1,000 people declared as foreigners earlier are already lodged in six detention centres located in prisons. Modi's government is also building an exclusive detention centre, which can hold 3,000 detainees.

"People whose names are not on the final list are really anxious about what lies ahead. One of the reasons is that the Foreigners Tribunal does not have a good reputation, and many people are worried that they will have to go through this process," Sangeeta Barooah Pisharoty, author of Assam: The Accord, The Discord said.