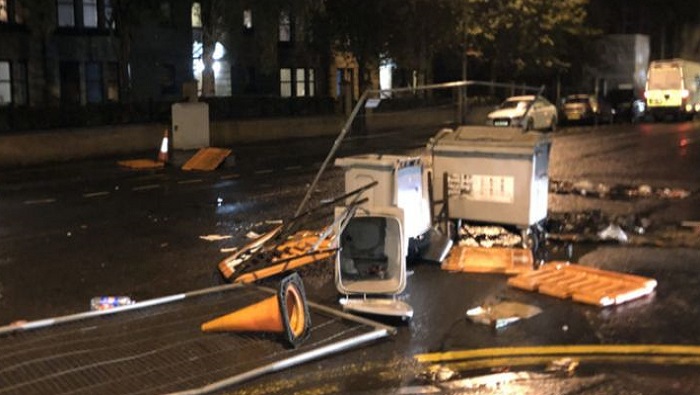 Glasgow: Riot police, mounted officers, a helicopter and dog units have been called in following an Irish Unity march and counter protest in Glasgow.

The planned march through Govan, by the James Connolly Republican Flute Band, was met by hundreds of "disruptive" counter demonstrators.

Police said this led to "significant disorder", with Govan Road blocked by officers.

Witnesses reported the use of smoke bombs.

The Irish Unity march was planned to start at 18.30 in Elder Park, Govan. But it was met by a counter demonstration of "several hundred people" from loyalist groups at about 19.00 (local time).

Chief Superintendent Mark Hargreaves said: "Police Scotland has a duty to facilitate processions and any peaceful protest, but this kind of behaviour by persons demonstrating against the parade is utterly unacceptable.

"It is extremely disappointing to see people acting in this fashion, causing fear and alarm to members of the public as well as putting many people at risk.”

He added: "Specialist public order officers in full protective equipment, the mounted section, air support and dog units have been deployed and we are using proportionate tactics to de-escalate the situation as quickly and safely as possible.

"Police Scotland will undertake a thorough and robust inquiry and take any necessary action against those found to have been causing disruption.”

It continued: "The council is clear that the law expects it to facilitate public processions; including those that some people oppose or find offensive.

"However, this cannot continue to be at the expense of the overwhelming majority of Glasgwegians, who want nothing to do with these marches, or counter-protests.

"The city needs and wants fewer marches. We are prepared to consider any action that will protect communities from morons intent on bringing mayhem to the streets of our city”.