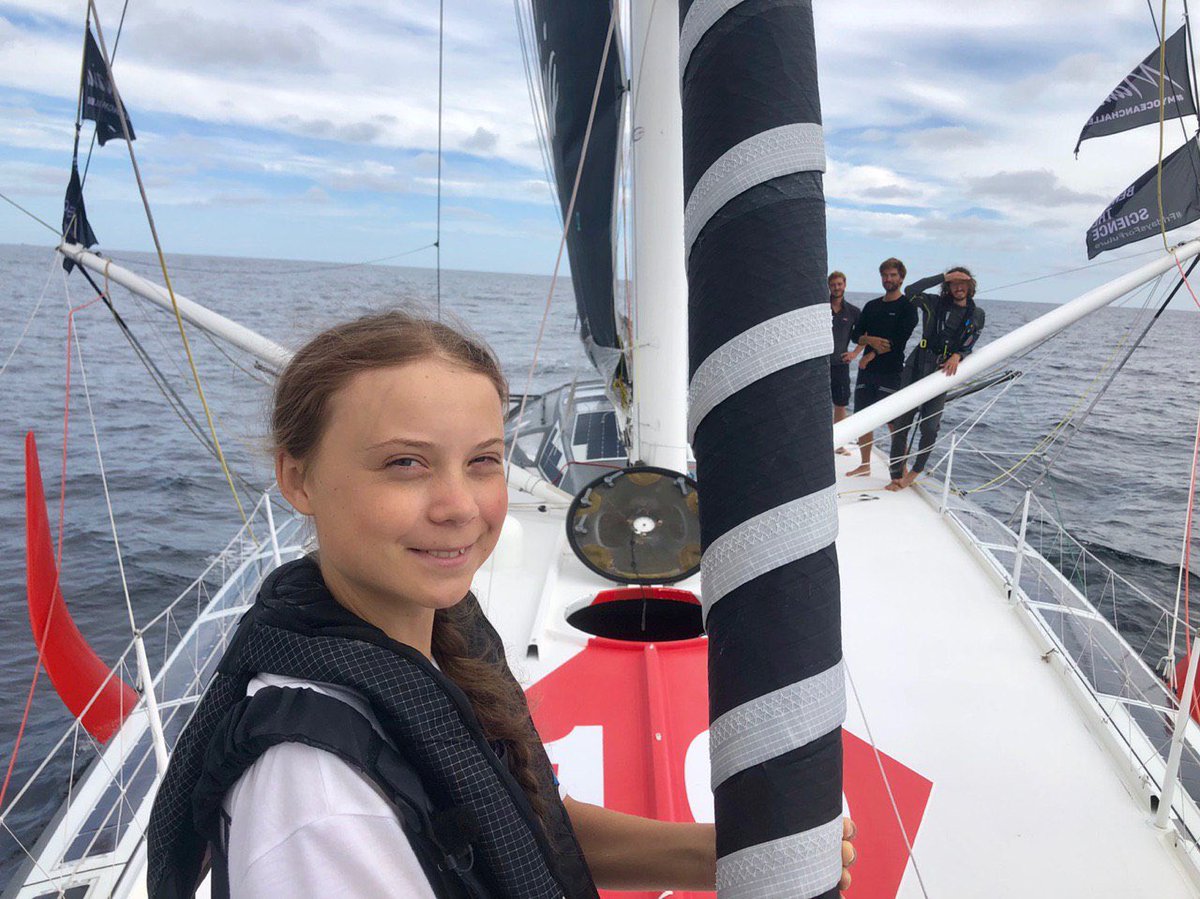 New York City: Teenage climate activist Greta Thunberg has arrived in New York, she announced on Twitter. She expects to come ashore this afternoon after 15-days spent crossing the Atlantic on a zero-emissions racing yacht, which she took instead of flying to avoid adding to her carbon footprint.

"We have anchored off Coney Island — clearing customs and immigration. We will come ashore at North Cove Marina earliest 14:45 tide allowing (sic)," she wrote on Wednesday on Twitter.

The teenager shot to international acclaim in August 2018 when she took time off school to demonstrate outside the Swedish parliament holding up a sign calling for bold climate action.

Since then, the Swedish teenager has become the figurehead of a rising movement of youth activists concerned about the climate crisis after her weekly protests inspired student strikes in more than 100 cities worldwide, according to reports.

North Cove Marina, where she will disembark, is on Manhattan's West Side, just blocks away from One World Trade Center.

Late Tuesday night, she posted a picture of the Long Island coast and wrote, "Land!! The lights of Long Island and New York City ahead."

The 16-year-old activist who started the Fridays For Future school strikes against the climate crisis is in New York to attend the United Nations summit on the climate crisis and to meet with UN Secretary General António Guterres on 21 September, according to reports. Guterres has called on world leaders to present concrete plans to reduce greenhouse gas emissions at the upcoming summit in New York.

Thunberg set sail on 14 August from Britain aboard the emissions-free sailboat. She was due to arrive in New York on Tuesday, but rough waters near Nova Scotia delayed her and the sailing crew.

She has posted regular updates about the journey to her Twitter feed so her 1.1 million followers could keep tabs on her. Thunberg also shared the technology that makes her journey carbon-neutral.

"Malizia 2 is fitted with solar panels and hydro generators making it one of the very few ships in the world allowing trips like this to be emission free," she posted last week.

Her insistence that the climate crisis should be on the top of every government's agenda has inspired youth activists to dedicate the week of the UN summit on the climate crisis to climate strikes. In Washington, DC, protestors aim to grind the city to halt to focus attention on worsening storms, floods, droughts and wildfires, and how poor people are uniquely vulnerable, according to a British newspaper.

"The level of frustration with the inaction of political leaders and corporations on the climate crisis is just really boiling over," Patrick Young, a 35-year-old who works with the group Rising Tide, said.

The Malizia 2 will not stay in New York. Instead, it will return, by air, to Europe. As for Thunberg, she is not yet sure how she will get back to Europe after the UN summit in September.