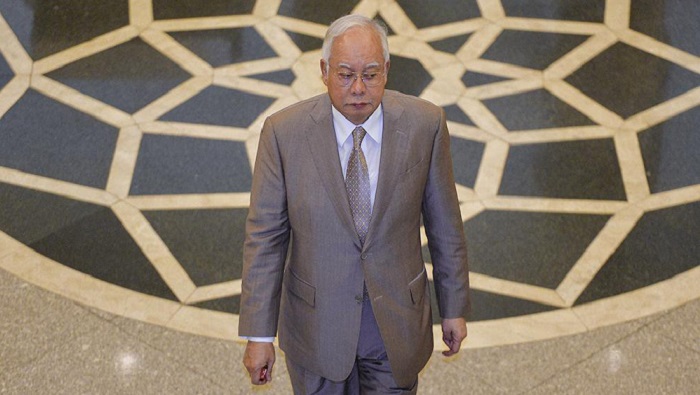 Kuala Lumpur: Former Malaysian Prime Minister Najib Razak arrived in court for the long-awaited first day of hearings for the biggest of five trials linked to a multibillion-dollar corruption scandal at the state fund, 1MDB.

The opening of the trial has been postponed several times to allow for the completion of a separate trial involving the former 1MDB unit SRC International.

Razak, who lost a general election last year, has been hit with 42 criminal charges of corruption and money laundering at 1Malaysia Development Berhad (1MDB) and other state entities.

He has pleaded not guilty to the earlier cases and maintains that the charges are politically motivated.

In his opening statement, lead prosecutor Gopal Sri Ram told the court on Wednesday that Najib used his position as Chairman of the 1MDB board of advisers, prime minister and minister of finance "to exert influence over the board of 1MDB to carry out certain abnormal transactions with undue haste".

"An elaborate charade was employed. It was acted out in four phases in which several characters played a part. His objective was to enrich himself," said Sri Ram.

He added that fugitive businessman Low Taek Jho, known by his monicker Jho Low, was an important character in the charade.

"The prosecution will establish facts, which will give rise to an irresistible inference that Jho Low and the accused acted as one at all material times," said Sri Ram.

Razak's lawyers had sought to delay the 1MDB trial to allow time for the conclusion of the SRC case at the High Court.

The SRC trial, which began in April, was adjourned on 14 August after Razak contracted an eye infection, halting the cross-examination of the prosecution's final witness. It concluded on 27 August .

Razak is facing a total of 42 criminal charges of corruption and money laundering at 1MDB and other state-owned entities where he has pleaded not guilty to all charges.

In Wednesday's highly-anticipated trial, Razak faces four charges of having used his positions to obtain gratification totalling $550m from 1MDB funds and 21 counts of money laundering involving the same money.

In an interview, James Chin, director of the Asia Institute at the University of Tasmania, said that Malaysians expect "a long, drawn-out" trial because of the complexity of the case.

"You're talking about a lot of money moving around many jurisdictions around the world. So it will be very complicated and we probably won't get a verdict until next year."

Chin also said that there is a "very strong" pressure on the government from the public "to find Najib guilty."

"But on the government side, I think the calculation is slightly different. They know that they have four more years to make sure that he's found guilty," he added.

"The strategy is basically to charge him with as many corruption charges as possible. The idea is that if he is found guilty in one of the charges, he will lose his status as a member of parliament, and this means that he will no longer be a threat in the next general election."

1MDB has spawned investigations in at least six countries, including the United States where the Department of Justice alleged $4.5 billion has been misappropriated from the fund.