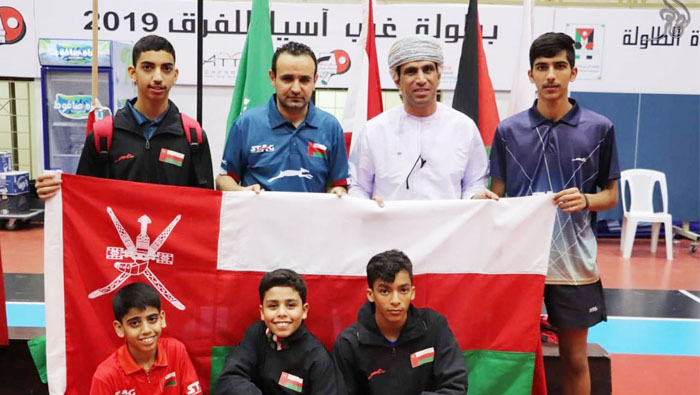 Muscat: Oman national table tennis (Under-12) team paddlers delivered impressive performance in the West Asian Championships for teams which was held in Jordan during August 15 to 19.

The Sultanate team positioned in third place after beating United Arab Emirates 3/1 in the third/fourth place match. In the semifinal round, Oman team suffered a 3/2 loss against Saudi Arabia in a thriller.

Omani paddlers Ahmed al Riyami and Loqman al Farsi were the stars of the Sultanate team for U-12. Both paddlers showed solid performances in all the rounds. The national (U-12) team played in group B alongside to Syria, Bahrain and Lebanon while the U-18 team grouped beside Jordan, UAE, Saudi Arabia and Lebanon.

The other national teams for U-15 and U-18 were very close to reach the podium but they lost in the deciding rounds of the matches due to the differences in the experience.

Oman’s accomplishment in the West Asian Championships for teams is right indication for the national teams to continue in this path and register better achievements in the forthcoming participations. The achievement is good credit for the Sultanate team as they will host one of the ITTF hopes and cadet world series in Muscat during October at the Sultan Qaboos Sports Complex.

Oman Table Tennis Committee (OTTC)’s board target was very clear since the formation of the committee to invest in the junior teams. OTTC established a dedicated junior center in many clubs to provide a professional training environment for the players. After few years, OTTC achieved the vision through reaching Omani paddlers to the podium.

“We started our preparations for this participation since beginning of summer through internal and external camps. All the junior players were involved in a vert intensive training programme to grow their technical levels and boost their table tennis skills. I believe claiming to the podium of West Asian will encourage the Sultanate players to provide better shows in the upcoming regional and continental events,” coach Mohammed Atoum said.

“Taking part at this international championships and tournaments are very essential for the local players to adapt with the international matches rate,” The Jordanian coach concluded.