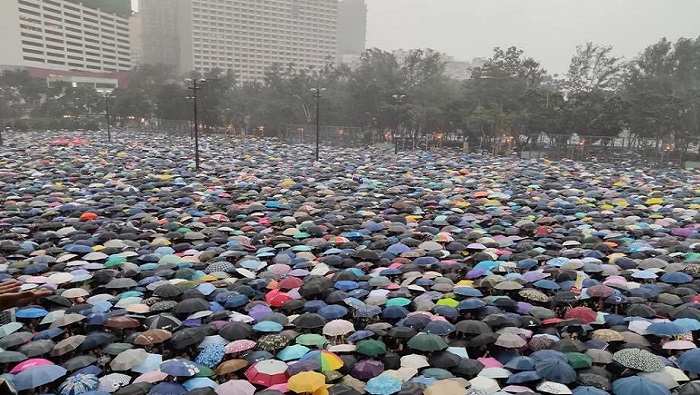 Hong Kong: An estimated 1.7 million people in Hong Kong – a quarter of the population – defied police orders to stage a peaceful march after a rally in a downtown park, after two months of increasingly violent clashes that have prompted severe warnings from Beijing and failed to win concessions from the city’s government.

Huge crowds filled Victoria Park on Sunday afternoon and spilled on to nearby streets, forcing police to block traffic in the area. Torrential rain came down an hour into the rally, turning the park into a sea of umbrellas.

At the same time, protesters walked towards Central, the heart of Hong Kong’s business district, and surrounded government headquarters.

Police had turned down a plan for Sunday’s march submitted by the Civil Human Rights Front group and gave permission only for a rally in the park. Those defying the ban risked being charged with unlawful assembly, which can lead to up to five years in prison.

“Stand with Hong Kong! Fight for freedom!” protesters shouted at the rally.

Throughout the afternoon, streets around Victoria Park were so densely packed that the march frequently came to a complete standstill. Some protesters walked on to a flyover near the park as the crowds on the streets were unable to move.

Protesters were orderly but burst into choruses of slogans as they waited to move forward. “Hong Kong people, go!”, “Reclaim Hong Kong, revolution of our era!” they chanted.

Observers saw Sunday’s rally, the largest in weeks, as a test of the movement’s momentum and public support as tensions between police and protesters have escalated.

“Even though the weather was so bad, even in the face of threats of the People’s Liberation Army and water cannons, Hong Kong people never back down,” said Wong, 21, a university student.

Wong did not expect this to be the last major rally. “For as long as the government doesn’t respond, there will only be more large-scale protests.”

US president Donald Trump said on Sunday he wanted to see the crisis resolved peacefully, warning against any hardline crackdown.

“I’d like to see Hong Kong worked out in a very humanitarian fashion ... I hope [Chinese] President Xi can do it... he sure has the ability, I can tell you that.

“I think it’d be very hard to deal if they do violence, I mean, if it’s another Tiananmen Square,” Trump told reporters in New Jersey. “I think it’s a very hard thing to do if there’s violence.”