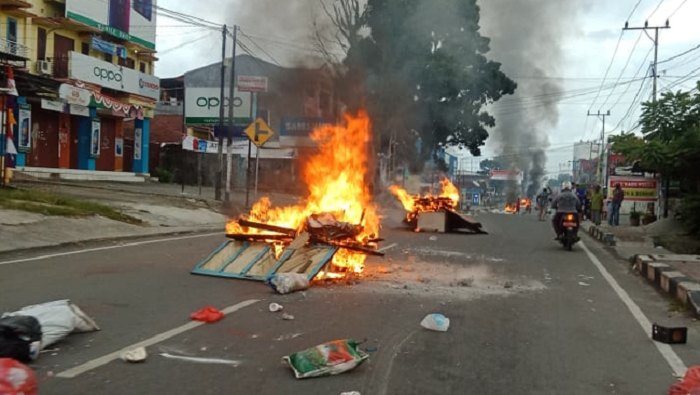 Jakarta: A large number of students in Indonesia took to the streets to protest alleged police abuse against ethnic Papuan students.

There were no immediate reports of casualties. The demonstrations are still ongoing.

In West Papua province's capital of Manokwari, protesters burned the parliamentary building and local stores, according to State police.

"For now, we are still focusing on collecting the data on the casualties and trying to calm down the masses," he said.

Images from Indonesia including those of many young students, show the protestors waving the "Morning Star" flag, which is seen as a symbol of self-rule by Papuans.

"We are not white and red, we are morning star," the protesters shouted, in reference to the Indonesian flag and the Papuan banner. Individuals carrying the banned flag could face arrest and imprisonment of up to 15 years.

There are also demonstrations reported in the city of Jayapura, the capital and largest city of Papua, the country's easternmost province.

The demonstration on Monday erupted following the recent arrest of ethnic Papuan students living in Surabaya and Malang in Java island.

The students were accused of throwing the Indonesian flag into a sewer -- allegations that they have denied in an interview with the local media, Suara Papua.

Responding to the report, the police locked down the dormitory of the Papuan students and fired tear gas to clear their rooms.