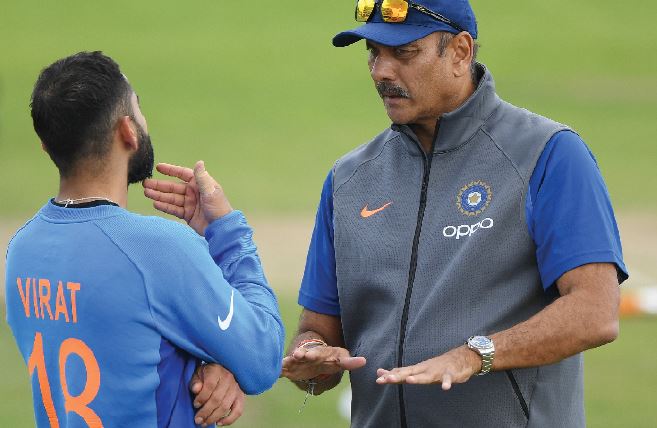 New Delhi: Newly reappointed India head coach Ravi Shastri believes his team needs to carry their superb Test and one-day international form in the shortest format ahead of the T20 World Cups in 2020 and 2021.

India are currently the No.1 Test side and No.2 in ODIs in the MRF Tyres ICC Team Rankings. Their surge in the Test arena stems from the fact that they have won 12 out of their last 15 Test series.

They have done remarkably well in ODIs too, winning the 2018 Asia Cup and reaching the semi-finals of the ICC Men’s Cricket World Cup 2019.

Shastri now wants the team to also focus on T20Is, a format they haven’t played a lot recently.

“This is a young side, one still in the making. It has the potential to remain the best team in the world,” Shastri told the Times of India.

“We’re the No.1 Test team and No.2 in ODIs. In T20Is, we’re No. 4 and that’s because we’ve not played those many matches in that format recently. It’s still a work in progress and there’s a lot more to be done.”

The 57-year-old, who was reappointed head coach of the Indian cricket team on Friday, 16 August, will oversee the first cycle of the World Test championship, two ICC T20 World Cups and several important home and away tours during his term, which extends until November 2021.

“There are two ICC T20 tournaments over the next two years, in 2020 and 2021. The Test championship cycle has begun, so that becomes top priority.

We have a splendid Test side that’s stayed at the top of the rankings and needs to keep up that good work.

“In T20Is, we need to take a fresh perspective and consolidate on the fabulous talent we have,” he added. The 2020 T20 World Cup will be played in Australia from 18 October to 15 November, while India will host the 2021 edition.

The veteran coach insists that if India are to do well in both these tournaments, they will need an approach that is significantly different from how they handle ODI cricket.

“One-day cricket and T20s have vastly different identities and one cannot look at it through the mere lens of ‘white-ball cricket’.

T20 is a wholly different ball game and that is how we are going to pursue it. “At best, four, or, maximum, five cricketers from the present 50-over set-up fit in a T20 perspective right now. We need to begin with that perspective and build on it.”