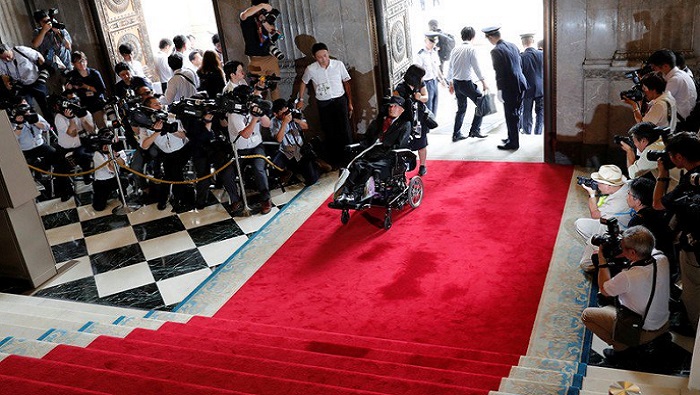 Tokyo: Japan’s parliament opened a special session on Thursday with its most diverse upper house yet, including more women, two severely disabled members and the first openly gay male lawmaker, all of whom were elected last month.

Newly crowned Emperor Naruhito read from a scroll in a ceremony attended by members of both houses.

Workers had removed chairs in the upper house to make room for the wheelchairs of the two disabled members, Eiko Kimura and Yasuhiko Funago, whose 21 July election wins point to changing attitudes in Japan, which has long kept disabled people hidden.

“I’m surprised to see that so many people have come,” Funago said through an aide who followed his eye movements as they scanned an array of Japanese letters in front of him. “I’ll try to meet people’s expectations.”

Both Funago, who has Amyotrophic Lateral Sclerosis, or ALS, a progressive disease that leads to loss of muscle control, and Kimura, who has cerebral palsy, ran from a small opposition group, the Reiwa Shinsengumi.

Last month’s elections also brought in 28 women, taking to 56 the total number of female members in the 245-seat upper house, or nearly 23 per cent, up from 21 per cent before.

But in the more powerful lower house, women make up just 10 per cent of the 465 members. In the two chambers taken together, women make up 14.5 per cent of members, below a global average of 24.3 per cent, data from the Inter-Parliamentary Union shows.