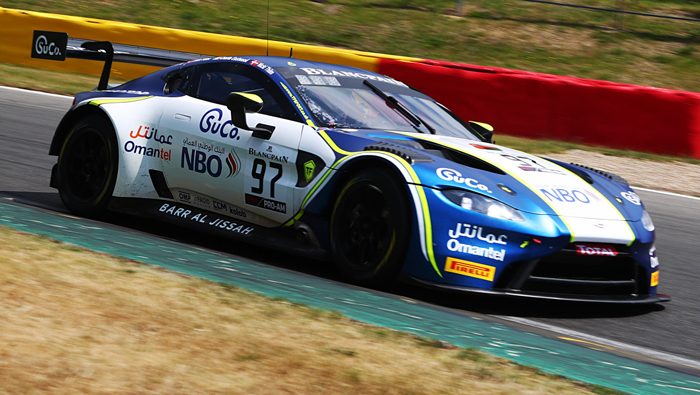 Muscat: Ahmad Al Harthy says he is more prepared than ever ahead of this coming weekend’s biggest race of the Blancpain Endurance Cup season, the flagship Total 24 Hours of Spa, where the hugely successful Oman Racing driver is aiming to continue his podium-perfect 2019 campaign in style.

Going into the 71st staging of the endurance classic, which begins at 16.30 (local time) on Saturday, 27th July, Muscat racer Al Harthy leads the Pro-Am championship standings along with team-mates Charlie Eastwood and Salih Yoluc and the clear aim is to further increase their advantage during the penultimate round of the campaign.

Spa, of course, is where Al Harthy won the Pro-Am title in 2017 after an exceptional season and a no less sensational campaign has been crafted with Oman Racing this year where the Aston Martin trio have an unbroken 2019 run of podium results.

In qualifying too, Al Harthy, Eastwood and Yoluc have combined to deliver a faultless run of pole position starts in Pro-Am at Monza in Italy, Silverstone in the UK and Paul Ricard in France, so a fourth consecutive grid-topping performance is a key target in Belgium later this week.

With the addition of very highly rated Aston Martin ‘factory’ driver Nicki Thiim to Oman Racing’s ranks for the twice-round-the-clock encounter, Al Harthy is confident the line-up is one of the most competitive Pro-Am entries on the remarkable 70-plus car grid.

During the officially timed two-day test at Spa at the beginning the month, the No.97 Aston Martin Vantage GT3 was quickest in Pro-Am on the opening morning, third fastest in the afternoon, sixth in the first session on day two and quickest again during the final run – also 11th overall in the latter.

“Spa is always a huge event, obviously the biggest race of the Blancpain season and by far one of the biggest in world motorsport – so we’re all very excited to be back”, said Al Harthy, “It’s fantastic to be leading the Pro-Am championship, we’ve had a very strong year so far in the Oman Racing Aston Martin and everyone is more than determined to try and keep our run of poles and podiums going."

“The two-day test was extremely positive and very encouraging, we completed a lot of work and we’re as well prepared as we can be going into this week. We have a lot of collective experience from the 24 hours, where we’ve had success in the past, so we hope to put that all into practice, deliver a strong performance and hopefully stay on top of the championship.”

With key backing from long-term partners National Bank of Oman, Oman Ministry of Sports Affairs, Omantel and Barr Al Jissah, Al Harthy is more than ready to proudly fly the flag for his homeland yet again in the Total 24 Hours of Spa.

Two years ago at the world-famous Belgian track he not only scooped the Pro-Am crown, in doing so he made history and headlines by becoming the first Omani, and first driver of Arab origin, to win a title in Blancpain.

Notably, the 24 hour race brings with it the chance to score significantly with points allocated after six hours of racing, 12 hours of racing and, of course, at the conclusion. Consistency and reliability, as well as pace, are therefore more important than at any other juncture of the season.

“You always need everything to come together in endurance racing, all the pieces of the jigsaw need to fit into place and sometimes you need a bit of good fortune as well”, added Al Harthy, “It’s key to prepare as well as possible, to try and have all bases covered and ensure the reliability is there. I’m confident we’re in a strong position coming into the race, hopefully everything will go to plan”

All of the build-up for the Total 24 Hours of Spa gets underway on Tuesday, 23rd July, with the ‘Bronze’ test session and competitors and teams will then head into Spa town centre on Wednesday, 24th July, for the annual parade and ‘meet and greet’.

Track action resumes on Thursday, 25th July, with free practice, pre-qualifying and then qualifying which begins at 20.10 (local time) before 90 minutes of additional night-time practice. Superpole will then take place on Friday, 26th July, at 18.30 (local time), with the Total 24 Hours of Spa race set to commence at 16.30 (local time) on Saturday, 27th July.