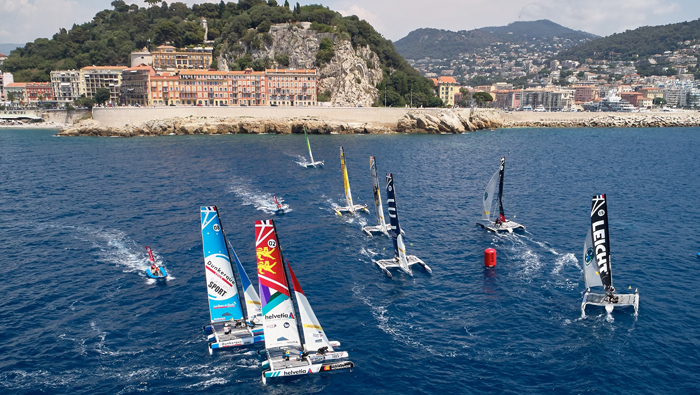 Nice: Oman Sail finished their 2019 Tour Voile adventure with a flourish on Sunday with two of their four teams earning a place in the deciding Super Final race in Nice.

At the end of the 17-day marathon event around France – which saw five long coastal races and more than 40 high-intensity stadium races at seven venues – the nerve-jangling double-points Super Final saw the lead of the race, as well as the overall Tour result, change hands several times.

Renaissance, who won three stadium race finals, finished the Tour Voile in an impressive fifth place in the 23-strong fleet with 711 points, just three ahead of EFG Private Bank Monaco in sixth and only eight behind the fourth placed Golfe du Morbihan team.

Morrison said: “We were winning the Super Final at the first mark. We had a great start and Abdul-Rahman did a fantastic job on the first reach and it was great to be ahead at the beginning – but it’s being ahead at the end that matters.”

Of the overall event he added: “The Tour this year has been very light winds on average, which levels the playing field a lot, so you have seen more teams being competitive. We only had three of us on the boat so we sailed all the time, and for Abdul-Rahman and Quentin it is very physical, so it’s been a pretty long few weeks.”

Skipper Pennec was delighted with the progress of his newly-formed crew, Al Jabri in particular: “We have really progressed. Hussein is really impressive, with his calm, his will. He is a winner. He does not like losing, even if he shows little. It's the mark of those who win.”

Ogereau said the team had “made great progress because we sail with the best”, a view echoed by Al Salmi who added: “We were mixing with the other teams and that is a good thing. Of course it is like a marathon but at the end we did it and we were successful. I am very proud. It shouldn’t be easy, but we continued and we did it.”

The all-Omani Team Oman Sail squad had taken their own race win back in the first Act of the Tour in Dunkerque, and skipper Akram Al Wahaibi, Haitham Al Wahaibi, Raad Al Hadi and Yasser Al Rahbi were rarely seen without a smile on their faces throughout the event.

Skipper Al Wahaibi said: “We expected the Tour to be intense, and it was very hard, but we did our best and we learn for next year when we will be stronger. In Oman we will be training hard and preparing for next year. We have a good team and everyone is improving.”

The overall Tour Voile title went to Team Beijaflore, also the winner of EFG Sailing Arabia – The Tour in Oman back in February, who were just able to hold off a hard-charging Chemineés Poujoulat crew who won the last three finals, including the Super Final, to finish just three points behind. Réseau Ixio took the final podium spot.

The Oman Sail crews will be reunited again with many of their Tour opponents at next year’s EFG Sailing Arabia – The Tour, the tenth edition of the Oman Sail organised event which will take a racing fleet along Oman’s coastline from January 26th to February 8th.