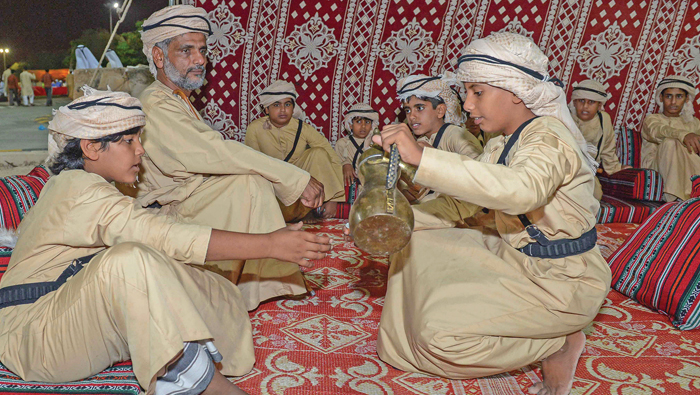 Salalah: Salalah Tourism Festival 2019, which will continue until 22 August, is one of the major cultural and entertaining festivals in the region that coincides with the tourism season in the Governorate of Dhofar, locally called as (Khareef Salalah).
The festival highlights the tourist, heritage, cultural and social potentials that the Sultanate enjoys in general and the Governorate of Dhofar in particular. The festival targets visitors and tourists from all governorates of the Sultanate and the GCC countries.
This year’s festival programme includes many activities and events highlighting various religious, economic, heritage, social, cultural, sports, leisure and artistic fields, as well as launching a variety of new events.
**media[1044451]**
Mohammed bin Omar Al Rowas, General Supervisor of the Festival Department in Dhofar Municipality, highlighted the efforts exerted by all government and private institutions to make the activities and events of the Salalah Tourism Festival a success. He pointed out that Dhofar Municipality has equipped and prepared all the facilities of the recreation center, such as theatres, sponsoring companies, the Heritage Village, its facilities, the electric and aerobic playgrounds, the consumer exhibition site and the centre’s other facilities.
He stressed the keenness of the festival to set up various activities and events outside the site of the Municipality’s Recreation Center, in cooperation with the private sector, such as the Balloon Carnival in Sahl Sahlnout and the activities of “Samahram Tourist Village” along with Atina Land Park, the “Friends of the Municipality” site in the Ittin Plain, as well as the family activities at Taqah and Mirbat parks.
Al Rowas said that the Balloon Carnival is one of the most important events of this year’s festival, which is held for the first time from 20 July to 25 August, organised by Sabeen Group, in collaboration with the competent government authorities and the private sector.
**media[1044453]**
The Supervisor General of the festival said that the Organising Committee of Salalah Tourism Festival will organise a national ceremony on 23rd of July at the Al Muroj Theater entitled “Omani Night”. It will also organise a national march in the city hall to celebrate the Blessed Renaissance Day.
Al Rowas said that Dhofar Municipality will organise an operetta early next August to celebrate the crowning of Salalah City as the capital of the Arab Resorts of 2019. He added that the municipality has harnessed all human cadres and modern technologies for this event, which embodies the celebration of the Sultanate in general and the Governorate of Dhofar in particular.
He said that the programme “Nights of the Festival” includes a variety of programmes, including the Salalah Tourism Festival for the locally called “Al Bara” traditional performance, which is held for the seventh time, in addition to the 2nd edition of the Omani folklore song. He pointed out the programme will host local, GCC and Arab artists and actors, as well as organising competitions and raffles, in addition to pioneers of the Gulf song event, as well as a variety of concerts by artists from the Sultanate and the Arab world.
The festival includes exhibitions and awareness, educational, service and marketing pavilions for various government institutions, private sector companies, Omani Women’s Associations and craft centres. Some exhibitions are held throughout the festival, others on specific period of time.
Al Rowas said that the “Oman Land of Friendship and Peace” exhibition, which is held annually, includes 120 different photos for His Majesty the Sultan, including the Royal Meet the People Tours and the Royal audiences to leaders of brotherly and friendly countries, in addition to various aspects of the Blessed Renaissance march.
He further said that the exhibition has achieved during the previous sessions a high turnout of visitors of the festival due to its national goals and messages of peace and patriotism and love of the country’s leader.
The Organising Committee of the festival is keen to hold cultural and religious events and activities, the most important of which is the 7th Holy Quran Memorising festival and the festival of photography and fine arts, in addition to the competition of the 3rd Mass Theatre Festival, which comes in a new shape in terms of the mechanism of the competition and its guests.