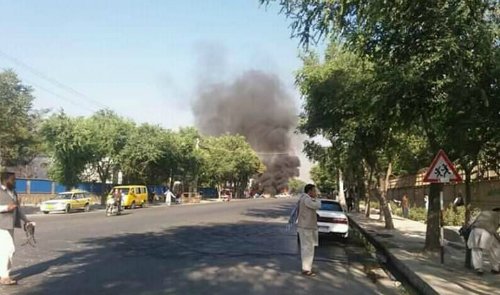 Kabul: At least eight people were killed in a blast near Kabul University in Afghanistan's capital on Friday, according to officials.

The blast happened as students were waiting outside the university to take their exams.

Former President of Afghanistan Hamid Karzai tweeted, "Terrorist attacks against our educational institutions are clearly against our rising youth and the better future of our country. Let us all stand in unity for the peace, sovereignty and progress of our BELOVED AFGHANISTAN."

It follows deadly attack on police headquarters in Afghanistan's southern province of Kandahar on Thursday.

At least 12 people were killed and around 80 were wounded in the incident.

Provincial police chief Tadin Khan said in a statement to the media that militants detonated two car bombs at a gate outside police headquarters.

After the blasts, gunmen opened fire from nearby positions, starting a gun battle with security forces.

"The fighting is over now. Some vehicles were burnt. Now the Afghan army and US helicopters are hovering in the area," he said.

The governor of Kandahar's spokesman Baheer Ahmadi confirmed that 12 people lost their lives, the deceased including policemen and civilians.

Afghan security forces cordoned off the area and victims were shifted to the closest medical facilities. Authorities fear the death toll could rise as some of the wounded were cirtically injured.

Afghanistan's President Ashraf Ghani condemned the attack in a statement, noting that while the Afghan government is looking for ways to achieve

Earlier last week, at least eight members of the security forces were killed and seven others wounded after a group of suicide bombers entered a hotel in Afghanistan's western Badghis province.

The blast followed the seventh round of US-Taliban talks in Doha which concluded with the issuance of a joint statement approving a 'roadmap for peace' to try to end 18-years of war in the country.