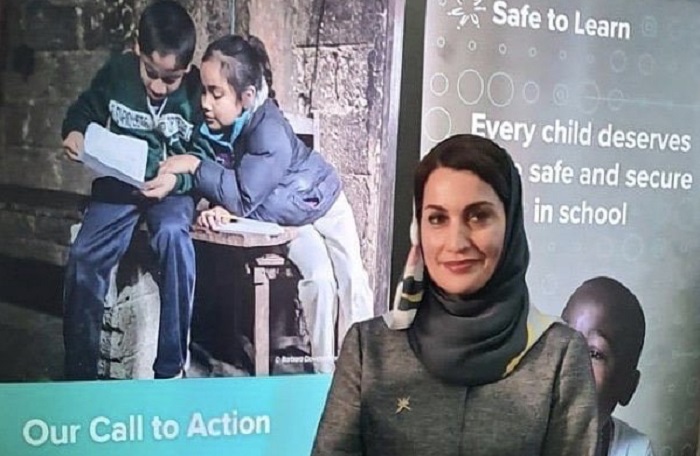 Muscat: Her Highness Sayyida Dr. Muna bint Fahd Al Said, the head of Oman’s Children First Association, has invited the special representative of the United Nations Secretary General on violence against children, to a conference on child welfare that will be held in Oman this September.
The International Society for the Prevention of Child Abuse and Neglect (ISPCAN) will hold its 2019 ISPCAN Congress in Oman, and Sayyida Muna has invited special representative Najat Mualla Majid to be a part of it.
The two women met during the a meeting of the Global Partnership to End Violence Against Children, which is being held on the side lines of the High Level Political Forum that is currently taking place in New York.
A statement from the Children First Association said, “Her Excellency Dr. Muna bint Fahd Al Said, met the special representative of the United Nations Secretary-General on violence against children, Najat Mualla Majid. She called on Najat Mualla to be one of the keynote speakers at the 6th International Conference to Protect Children from Abuse, which will be held for the first time in the Sultanate in September 2019.
Children’s issues
“The meeting included discussing the role of the Sultanate in children’s issues and rejecting all kinds of violence,” added the statement from CFA. “Najat Mualla praised the pioneering role of the Sultanate in enacting laws that criminalise child abuse.”
The 2019 ISPCAN Congress will be held in collaboration with the Ministry of Social Development, Children First Association, Sultan Qaboos University, UNICEF and the Arab Child Abuse and Neglect (Arab-CAN) society.
Commenting on this, Lana Al Wreikat, UNICEF’s Oman representative, said, “UNICEF is happy to be part of Oman’s commitment towards the protection of children, with substantial support from the Ministry of Education, along with Oman Technology Fund, Children First Association and Omantel.
“The protection of children from all forms of violence is a fundamental right and we have an obligation as governments, civil society and as a community to commit to this campaign as part of our support towards the Sustainable Development Goals.”
One of the key discussions at the ISPCAN summit will be the discussion of the Safe to Learn campaign, a UN initiative that was launched in May 2019, and is dedicated to ending violence in schools so that children are free to learn, thrive and pursue their dreams. The aim is to work with governments, civil society organisations, communities, teachers and children themselves to end all violence in every school by 2024.
A statement from the Global Partnership to End Violence said, “The Government of Oman commits to tackling violence in schools - a matter close to Princess Mona Al-Said’s heart. At the Safe To Learn Leaders Event, she encouraged governments, civil society & communities to commit to ending violence as part of achieving Global Goals.”