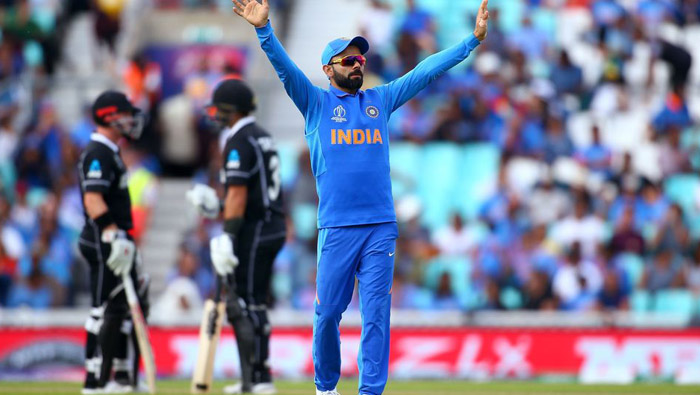 Manchester: After more than five weeks of exciting cricket, the ICC Men's Cricket World Cup now enters its decisive phase as India and New Zealand face-off in the first semi-final at Old Trafford on Tuesday.

The Indian team, despite being plagued by a couple of injuries, have topped the World Cup league stage points table with seven wins from eight completed games. While Rohit Sharma has been at his fluent best, having already scored five centuries so far, his new opening partner Lokesh Rahul has put up scores of 77 and 111 in his last two innings.

The bowling attack too, led by the ever reliable Jasprit Bumrah has been delivering on a consistent basis. Virat Kohli will have some interesting decisions to make in the bowling department, as he seeks a perfect combination for an all important clash on Tuesday.

The 2015 runners-up New Zealand, have had a mixed campaign so far. Powered by some collective bowling performances and led by their skipper Kane Williamson with the bat, the BlackCaps had notched up five wins from their first six games which included a complete washout against India.

However, three successive losses thereafter saw them slipping to the fourth position, as they qualified for the semi-finals by virtue of a superior net run-rate. New Zealand will hope for a strong performance from their opener Martin Guptill, who hasn't been able to put up a significant score ever since his team's opening game against Sri Lanka.

Recent form and team combinations suggest India are hot favourites. However, New Zealand, led by a shrewd captain in Williamson, is capable of producing a clinical performance against any opposition on any given day.

Virat Kohli (India): The Indian captain has been a consistent performer in this World Cup, having scored 442 runs in eight innings so far. However, he's yet to register a three-figure score in the tournament. A high pressure game such as a World Cup semi-final, presents a perfect opportunity for Kohli to put up another match-winning performance for India.

Trent Boult (New Zealand): Much like he did in the 2015 edition, Trent Boult has been leading the New Zealand bowling attack with 15 wickets from eight games. Boult, who had powered his team to a six-wicket win with figures of 4/33 in the warm-up game against India, will look to produce a similar performance to put his team in a commanding position.

Skies are likely to remain cloudy throughout the day, with chances of some odd light showers. Teams batting first have won each of the five games played at Old Trafford in this tournament and considering the nature of the contest, both captains will look to bat first.