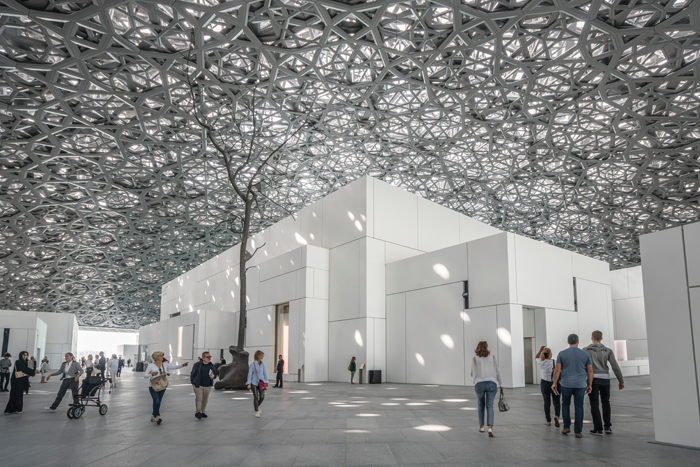 Travelling is fun, isn’t it? It’s always nice to head out and explore the big wide world. This summer, while many of us are headed overseas for holidays with family, there are surely some of you who’d like to experience a more peaceful, quieter side of life, but still can’t seem to fight the travel bug.
Within your mind are (likely) feelings of wanting to travel, but at the same time, you wonder how far you can go before going too far. If you’re looking for the best of both worlds, we have an answer for you.
Abu Dhabi, the capital of the United Arab Emirates, is not too far from Muscat, and makes for a great extended break if you’re looking to travel, but not seeking to go too far away.
Home to a number of cultural, historical and entertainment venues that are sure to suit you, whether you’re travelling with friends, family or your significant other, Abu Dhabi is definitely a place you’d want to check out this summer.

Getting there
The capitals of the UAE and Muscat are about 520 kilometres apart, a journey that will take you a little more than five hours by road. The driving time makes it perfect for you to pack your gear and head out with your friends and family for a memorable road trip. Do remember to leave plenty of time at the border crossings, particularly during the busier times of the year. In addition, travelling for long stretches of time can cause fatigue, so do remember to pull over and take a break from time-to-time. This would be particularly true when it comes to families travelling with small children.
Alternatively, a flight from Muscat to Abu Dhabi will take an hour and a quarter. Daily flights are available between the two cities, with as many as five flights operating per day. Should you wish to then rent a car and explore Abu Dhabi, you can do so while you’re in the city. An Omani drivers’ licence will allow you to hire a car across the border.
Travelling between Oman and the UAE does require a visa. Some nationalities do get visas on arrival, so it is best to check before you do plan your trip. If you are not eligible for a visa on arrival, you will need to book one online, or through a travel agent.

Ferrari World Abu Dhabi
Located on Yas Island, Ferrari World Abu Dhabi is a motorsport-themed park run in collaboration with the famed Italian car makers.
If you’re a thrill-seeker and an adrenaline junkie – or just want to experience the world’s fastest roller-coaster for the fun of it – then the Formula Rossa is definitely the place for you to go. Accelerating from a speed of zero to 240 km/hr in a mere 4.9 seconds, expect eye-popping, heart-pounding moments of incredible thrill as you soar up to heights of 52 metres.
In fact, so fast is the acceleration that you feel nearly five times the effect of gravity as you normally would while you’re hurtling on the Formula Rossa. In addition to this, there are 36 other rides and attractions at Ferrari World for people of all ages.
In a new spin on an old classic, Ferrari have taken the concept of bumper cars and replaced them with Formula 1-styled tyres that can seat up to five people, so that the entire family can enjoy the whizz-bang spectacle of the bumper car, a favourite game for all those who grew up during a simpler time.
Motorsport lovers are also going to want to check out Made in Maranello, an interactive ride that transports you to a mock-up of the factory in Italy, where Ferrari cars are lovingly made even today. To see more of the boot-shaped nation, as you go on a virtual tour of the Mille Miglia endurance race, the legendary spectacle that takes place on the nation’s open roads. These, however, are just a few of the spectacles offered to visitors at Ferrari World Abu Dhabi.

**media[1040343]**
Warner Bros World
Opened just last summer, Warner Bros World Abu Dhabi truly does have to potential to transport you to another land, and hopefully, another time.
Born of the whimsy, imagination and creativity of the four Warner Brothers – Harry, Albert, Sam and Jack Warner – it was these four who gave the world the now-legendary creations of Bugs Bunny, Daffy Duck and so many other cartoons we used to rush home from school to watch when we were little. WB World has plenty on offer for the littles: Batman and Superman – two of pop culture’s most iconic heroes – have their homes in this theme park. If you aren’t sure which one to enter first, Gotham or Metropolis, then just do one after the other. You’re on vacation, after all!
Warner Bros have set the gold standard for entertainment in more ways than one: Tom and Jerry, arguably the most famous cat-and-mouse duo to visit us on the small screen, and the Road Runner and Wiley Coyote both have their own dedicated sections at the theme park, which is crammed with rides and must-see attractions.
One of the best ways to get away from the summer would be to check out the Flintstones Bedrock River Adventure. Located in the Bedrock section of the park, it gives you the chance to join Fred and Wilma Flintstone as the world’s modern Stone Age family take you back through time into the world of prehistoric...one that is truly epic.

**media[1040344]**
Louvre Abu Dhabi
It’s only natural to want to do something in a more sedate and relaxed manner once you’ve spent the morning entertaining the children, or dare I say, giving in to your inner child, so the afternoon might be the best time to soak up some culture and introduce the little ones to the wonders of the world.
Built as part of a ten-year deal with the Louvre in Paris, the Louvre Abu Dhabi was designed by Jean Nouvel, the same architect who designed the original museum in Paris, as well as the newly-opened National Museum of Qatar.
Built partly on the land and partly on the water, its black-and-white minimalist, simple design is purposely designed to reflect function and purpose ... the Louvre Abu Dhabi is home to a treasure trove of historical works of art and ancient antiquities from all across the globe.
Featuring European artefacts that date back to the time of the ancient Greeks and Romans, the Middle Ages, the Renaissance and Classical ages, as well as the ages of Discovery and Enlightenment, the museum does truly work in showing people nit just what life was like for our ancestors, but the thoughts that influenced their artistic expressionism.
Displayed alongside these are artefacts from the same time periods but sourced from the Orient, Africa, the Middle East and South-East Asia. The idea here is show people how different civilisations across the world evolved parallel to each other. With the fine sculpture work of Greek statues displayed alongside Egyptian papyrus, Chinese incense burners, fine jewels and intricately filigreed gold work from India, African spears and Arab clothing from eras of yesteryear, to see how the world evolved together yet separately, as one, is truly astonishing.
As is the architecture of the museum instead. Three layers of steel were interwoven to allow a dreamy, starlight pattern to envelop those who exit the museum and head to the courtyard, which has been designed in the form of a wind tunnel to allow for natural ventilation and diffuse the effects of the hot Arabian summers.

Manarat Al Saadiyat
Fusing traditional Islamic architecture with western styles, Manarat Al Saadiyat is one of the many museums located on Saadiyat Island, the zone earmarked for cultural and artistic development in Abu Dhabi.
Up to eight museums have been planned for the island, and one of them is the Manarat, a space opened to give artists in the region a space to exhibit their creative works and provide them the opportunity to get recognised.
There’s never a fixed exhibition at Manarat Al Saadiyat, but rather a rotating collection of exhibits that are present during certain parts of the year. While they might be different in their subject matter, what draws them together is that they are subjects that artists really want to discuss.
Go in on a weekend and you might for example see a comic book art fair, with artists bringing to life their interpretations of their favourite comic book characters, as well as superhero creations they wish could one day have their own series. Yes, it might sound childish to some, but a look at these images will truly get you to think, and that’s what art is really about.
On another week, you might have arrived in time for another episode of Abu Dhabi Art, the year-long art fest that brings together artists who showcase their ideas on current affairs from across the world.

Yas Marina Circuit
You’ve seen Michael Schumacher, Kimi Raikkonen and Lewis Hamilton tear it up on the asphalt time after time after time, but have you ever wanted to drive a Formula One car on a real F1 race track?
At the Yas Marina Circuit, you can do just that. A venue that is sure to excite petrolheads and motoring enthusiasts, it is a place that you definitely must see if you wish to know about what goes on behind the scenes at a Formula One race.
The 21-corner, twisting, turning circuit is a combination of several long straights and sudden corners, intended to act as a test for rookie and seasoned F1 drivers alike. If you are a fan of the Formula One series of races, then you might want to head there during the Abu Dhabi Grand Prix.
This showpiece event aside, the track has also hosted several other motorsport and non-motorsport events, including the GP2 Asia Series, the V8 Supercars Series, the GT1 World and the World Triathlon Series.

**media[1040342]**
Al Ain
If you’re headed to and from Abu Dhabi by road, chances are that you are going to pass through Al Ain, a city located just 20 kilometres from Buraimi on the Omani side of the border.
The city is the birthplace of Sheikh Khalifa bin Zayed Al Nayhan, the current ruler of Abu Dhabi and the President of the UAE, and is one of the oldest Emirati settlements in the region. The city is home to many forts, including Al Jahili fort, one of the largest in the area, which was initially built to protect farmers and date growers in the surrounding area. Life in Al Ain is very similar to that of Oman where people go about their work at a leisurely, unhurried pace.
Visitors are also welcome to visit Al Ain Oasis and see its extensive Falaj system, the historic irrigation system used by desert farmers.
The one place that is sure to delight children and adults together has to be the Al Ain Zoo. Home to a number of animals and birds including the Mhorr Gazelle, the Arabian Oryx, the Arabian Leopard and many others.
The zoo contains both a house for big cats such as the rare white tiger, the Royal Bengal Tiger, the Arabian Leopard, the black leopard, and both black and white lions. An aviary for birds is also present on site. Al Ain Zoo is also home to many of the United Arab Emirates’ conservation programmes for endangered and at-risk species of animals. [email protected]